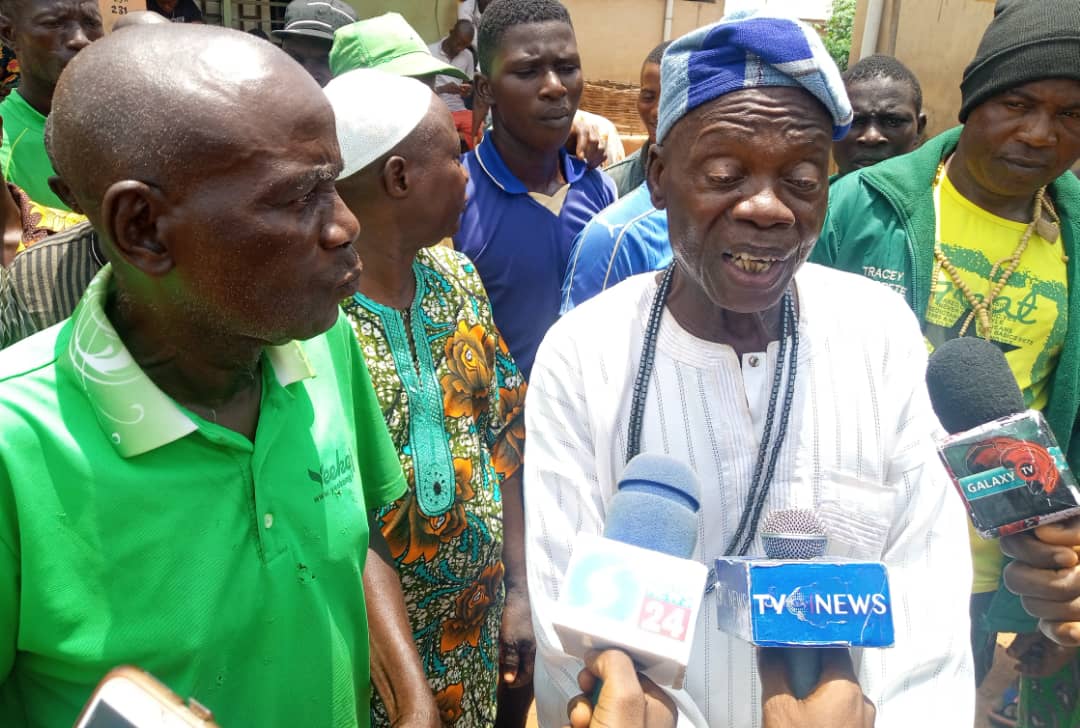 Prince Simiolu Oyekehinde speaking with journalists said land grabbers have been terrorising their community for over two years.

Residents of Isofin town under Ewekoro local government area in Ogun state have accused land grabbers of terrorizing their community on the order of former President Olusegun Obasanjo.

The Baale, Isofin town, Prince Simiolu Oyekehinde who spoke to journalists said the land grabbers have been terrorising the community for over two years and encroached their lands.

Prince Oyekehinde said the land grabbers invaded the community with armed policemen in the early hours of Wednesday and harrassed the village chiefs with a threat to arrest them if they resist the land grabbers from working on their land.

He claimed that the invaders who were acting on the order of Adelani and Olajumoke families, stormed the village with thugs suspected to be land grabbers and attacked the village chiefs who resisted the illegal sales of their lands.

Also speaking, a community leader in the town, Chief Dada Majekodunmi explained that a certain man simply known as Seye has been using Chief Olusegun Obasanjo’s name to cause crisis in the community.

Chief Dada alleged that each time police arrest the invaders, the said Seye usually get them on bail under the name of Chief Obasanjo.

He, therefore, appealed to the governor Dapo Abiodun and the State Commissioner of Police to provide adequate security for them as their lives are in danger from the land grabbers.

He equally called on Chief Obasanjo to call the land grabbers to order to avoid a crisis in the community.

“The first person we suspect is the Olajumoke Family. There are two Alhaja and children of the town, their mother is the legitimate child of the soil, they have their father properties elsewhere.

“But they brought in Kazim Bello a.k.a Abogun to terrorize us in this village and he’s not an indigene of this town, he said he belongs to Onawale family, whereas there is nothing like Onawale family in Isofin town.

“They came around yesterday with policemen, they said they are from Eleweran, and Abuja and these Alhajas have been boosting that they know people and cannot be arrested, even if they were arrested, people will come to their rescue to bail them out.

“Moreover, there is a boy called Sheye. He has been bragging that if the land grabbers are arrested he will come to the station and bail them out. Because he used our father’s name, Chief Olusegun Obasanjo (OBJ) that one of his junior brothers is the brain behind this thing.

“We are now appealing to our father, because we are from the same Owu kingdom. So, we are calling on our father, with due respect to call on these invaders to stop encroaching our land because people are suffering. People are using your name to terrorize us in our Town.

“We know their system, they will want to frustrate you. We are now appealing to the governor of Ogun state, His Excellency, Prince Dapo Abiodun to come to our rescue. We are also calling on the speaker of the House, Rt. Hon. Oluomo and we are calling on the Rep member, Hon. Isiaka Ibrahim to come to our rescue. We are handicap, we are powerless. They are ready to use our land sell it and use it to fight us back which they’ve been doing before you know they grab the land overnight and put a fence.