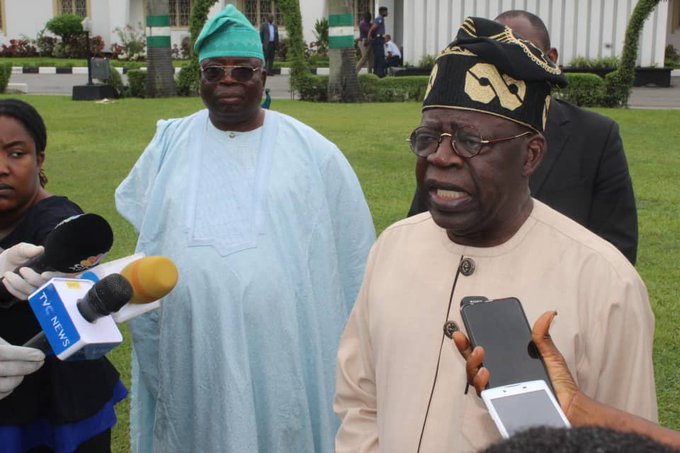 National leader of the All Progressives Congress Bola Tinubu donated N200m today to support the national efforts to roll back the coronavirus pandemic in Africa’s most populous country.

Tinubu who marks his 68th birthday today, said the money will go to Lagos and the Nigeria Centre for Disease Control(NCDC).

He said that if not for the coronavirus disease, his annual birthday celebration, which was often accompanied by a colloquium, would have been held as was done in the last 12 years.

”We could not do so this year but by God’s grace we will do so again.

”The circumstances this year prevent us from gathering together to celebrate my birthday, but I would still like to mark the occasion.

”That is why I have chosen today to announce that I will be making a donation of N200 million to fight this deadly virus.

”In pursuant to this pledge, N100 million will be made available to the government of Lagos State and another N100 million to NCDC to support their efforts in fighting the scourge of COVID-19

”Together, we will overcome this disease,” Tinubu said.

In a special birthday statement, released on Saturday, Tinubu devoted a large space on the pandemic, asking Nigerians to close ranks to fight the invisible enemy.

“The foremost imperative is that we recognise that corona is here. We must cast aside the myths that we have comforted ourselves with these past weeks. We told ourselves this was not a black man’s disease. We took false comfort in this self-deception. Well, black people have contracted the ailment; black people have also died from it. We hoped that our hot climate would bake and destroy the virus. That wish now appears too optimistic.

“We even said our history in dealing with malaria and other tropical diseases granted us some type of immunity. Well, I doubt that immunity exists as there is no scientific evidence supporting this claim. If such an immunity exists, it is at most incomplete and so unreliable as to be of no avail to large segments of our population.

“The rich cannot bargain with the disease or pay it off. It neither reads bank account statements nor is it intimidated by them. The poor, likewise, are subject to it for it has no mercy nor cares about one’s prior or present hardships. Neither does it seem to study geography. Northerner and Southerner are equally its prey.

“It will attack those who pray at the altar in church as well as those who face the Qiblah when praying in the mosque. To corona, we are all the same. Thus, to fight corona, we must treat each other the same, as brothers and sisters in one national family under one Heaven. For we are of one blood; this crisis is a stark warning that we must begin to act in consonance with that common humanity.

“It is true that we and other African countries are among the nations thus far least affected. However, we must not think this means geography and climate have erected a protective shield on our behalf. At best, these things constitute a partial barrier that may have slowed but will not prevent the growing threat.

“China and other Asian nations took drastic, wholesale action to thwart the viral spread. North America and Europe initially took small steps against the virus. Those did not work. Now they are fast implementing lockdowns of whole cities and closures of key segments of their economies.

“We must be prepared to do the same, though it is alien to our communal culture and way of life. Let us be frank.

“The public health care systems of developed nations have been overwhelmed by this virus. They are running out of equipment and healthy doctors.

“Our public health care system is much smaller and less equipped than those in Europe and North America. We cannot afford to put undue pressure on our system because it cannot bear the great weight of a pandemic. Thus, it is incumbent on us to thoroughly implement and obey social safety and distancing techniques so that we halt the spread of the disease and keep hospitalisation to the barest possible minimum”.