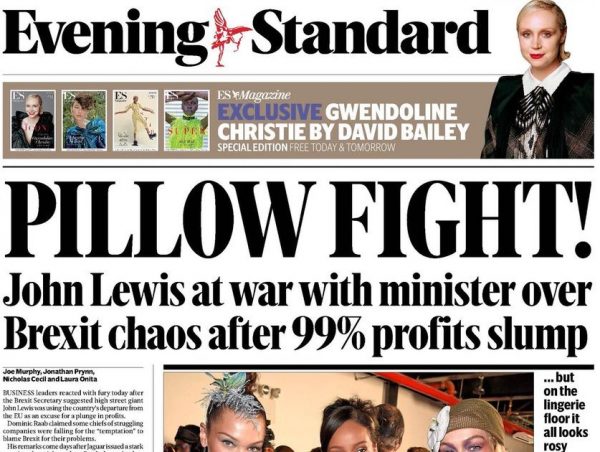 A past Evening Standard front page

The UK Evening Standard has imposed a 20% pay cut on some staff and furloughed others, a move that may have breached the country’s employment law, reports The Guardian.

The newspaper announced the moves to staff on Wednesday in response to a dramatic shift in the ad market amid the coronavirus crisis.

It also said it was halting publication of its weekly magazine ES.

The London newspaper, edited by the former chancellor George Osborne, reported losses of £23m over the past two years. It relies on advertising for more than 80% of its revenues.

Osborne said the publisher had taken these “hard decisions so we can keep our people in jobs and go on bringing the paper to you during this crisis”.

Employment lawyers said companies cannot unilaterally impose pay cuts or furlough staff without consultation. It is understood that Standard staff were not aware of the changes before the announcement.

The newspaper said it had implemented “immediate measures” but did not directly comment on how it had consulted staff.

It is unclear what proportion of staff have been furloughed or had their pay cut. The salary reduction is thought to apply to all working employees earning more than £40,000.