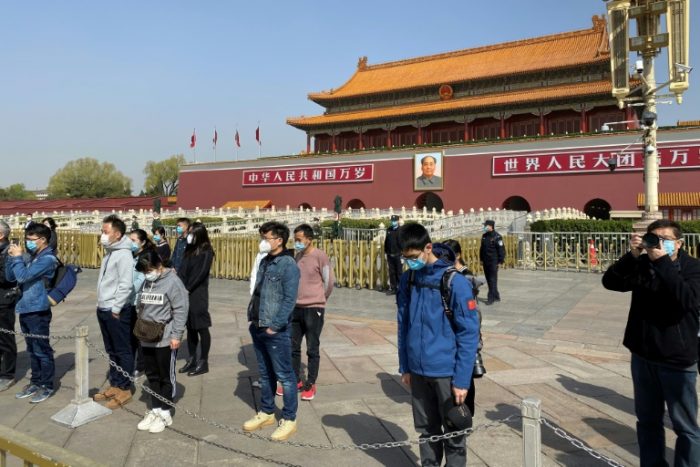 China came to a standstill on Saturday to mourn more than 3,300 patients and medical staff killed by the coronavirus pandemic.

The world’s most populous country paused to observe a nationwide three-minute silence.

In Wuhan — the city where the virus first emerged late last year — sirens and horns sounded as people fell silent in the streets.

Staff at the Tongji Hospital stood outside with heads bowed towards the main building, some in the protective hazmat suits that have become a symbol of the crisis worldwide.

“I feel a lot of sorrow about our colleagues and patients who died,” Xu, a nurse at Tongji who worked on the frontlines treating coronavirus patients, told AFP, holding back tears.

“I hope they can rest well in heaven.”

National flags were lowered to half-staff across the country, including in the capital’s Tiananmen Square.

Officials said the observance was a chance to mourn virus “martyrs” — an honorific title bestowed by the government this week on 14 medical workers who died fighting the outbreak.

The hashtag “China remembers its heroes” racked up nearly 1.3 billion views on the Twitter-like Weibo platform on Saturday.

The martyrs include doctor Li Wenliang, a whistleblower in Wuhan who was reprimanded by authorities for trying to warn others in the early days of the contagion.

Li’s death from COVID-19 in February prompted a national outpouring of grief and anger at the government’s handling of the crisis.

The ruling Communist Party has sought to direct criticism to local authorities in Wuhan and surrounding Hubei province, who have been accused of downplaying the severity of the virus at first.

Saturday’s commemoration coincided with the annual Qing Ming holiday — the “tomb sweeping” festival — when Chinese people visit the graves of relatives and leave offerings in remembrance.

But in a sign of the times, the visits were controlled.