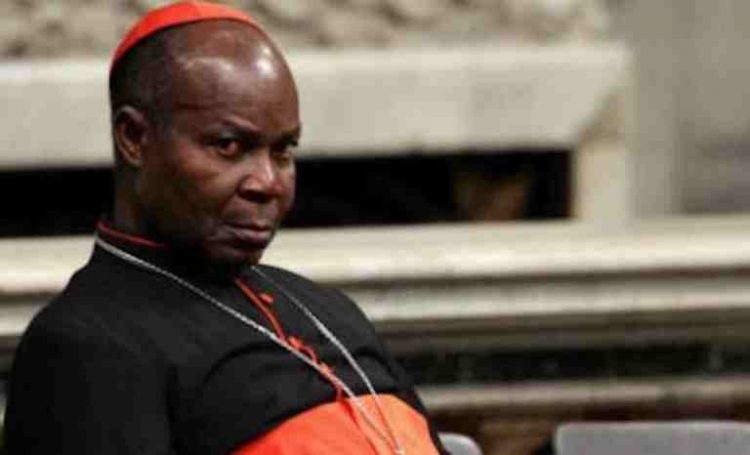 Former Archbishop Emeritus of Lagos, Catholic Church, Anthony Okogie has said Coronavirus outbreak in Nigeria is a blessing in disguise.

He said the outbreak of COVID-19 had been a dangerous yet revelatory moment in Nigeria, saying it was dangerous because this deadly pandemic had infected over a million and killed thousands of citizens of the planet, as no one seemed to know when and how it would end.

“In the midst of poor-quality leadership, however, Nigerians must speak in laudatory terms about Gov. Babajide Sanwo-Olu of Lagos, his Commissioner for Health, Professor Akin Abayomi, and his entire team for rising to the occasion. For right or wrong reasons, Lagosians have been critical of his government since its inauguration on May 29, 2019.

“But it must be admitted that with a population said to be close to 15 million, if Gov Sanwo-Olu and his team had not provided outstandingly exemplary leadership, we would have had a more dangerous situation in our hands. At the risk of making a hasty judgement, it is to be placed on record that, as at the time this is being written, Gov Sanwo-Olu and his team have largely prevented the spread of the virus in Lagos. Let us pray for them and encourage them so that they will continue to show exemplary leadership to other political office holders in Nigeria,” he said.

Okogie, in a statement, said that COVID-19 had also revealed to us that, rather than invest in good health care service delivery in Nigeria, the nation had a political arrangement that made it possible, even encouraging, to waste Nigeria’s money on government officials and health tourism abroad.

“Thanks to our country’s constitution dubbed federal, government in Nigeria is embarrassingly big, sinfully expensive, prone to corruption, and scandalously inefficient. Nigeria cannot adequately invest in the sectors of health and education because, among other reasons, the constitution of Nigeria has established offices that will require an endless flow of petrol-dollars to maintain.

“By the time low-grade leadership combines with big government and the seemingly irresistible tendency to steal and or waste Nigeria’s money, you find a country whose hospitals are reduced to mere consultation rooms. It is therefore insufficient for our legislators to forfeit their salaries for two months, as they have offered. It is also unsatisfactory for Senators to donate half of their salaries to tackle COVID-19.

“The humongous basic salaries and allowances of our political office holders should become a thing of the past. The money should be used to establish a regime of high-quality medical service delivery. COVID-19 has revealed to us that if we do not do something positive about our hospitals in Nigeria, if we do not invest our money in medical research, we shall one day find ourselves in a situation where we cannot even board a flight out of Nigeria to go on medical tourism. Let us make hay while the sun shines,” he added.

He said those who claimed they did not to know what the clamour for restructuring was about, the outbreak of Coronavirus had revealed an explanation, saying that Nigeria needed to restructure the relationship between her government functionaries and her citizens.

Okogie added that the current constitutional structure provided for too many offices because it put in place a government that was too big, noting that constitutional restructuring was a necessary condition for the production of high-quality governance.

“But if we continue to run the affairs of our country with a constitution that impoverishes and disables the citizens by establishing offices that do not serve the people, then we would not have learnt good lessons from this pandemic.

“We are spending billions buying brand new cars for our political office holders, paying them sundry allowances, when we have no good hospital to handle the current emergency. Government impoverishes Nigerians, and, the same government has now decided to spray raw cash on the people it impoverishes. On prime-time television, we witnessed the spectacle of bales of naira notes, and a minister of the Federal Republic was doing the distribution.

“But government could and ought to have used this moment to encourage Nigerians to open bank accounts. A more transparent means of giving out the money would have been to ask each person for his or her bank verification number and to send the money into their accounts. Apart from the fact that it would have encouraged more Nigerians to open bank accounts, it would have made it possible to account for every naira that is given out. In the same vein, we have heard how billions of naira are being donated to government without government telling Nigerians how the donation will be spent,” he said.

According to him, COVID-19 had also revealed to Nigerians that there were false prophets living among them, saying that in a country where once “you grab a Bible and a microphone you become a pastor or prophet or apostle, where you can become founder of a church without any serious theological formation, we have seen how some of our religious leaders have resorted to dishing out false prophecies.

“We have been treated to the cruelty of conspiracy theories woven by attention-seeking pseudo-apostles to nurture fear in the minds of people. We have seen how those who did not foresee any pandemic when, at the beginning of the year 2020, they claimed to be “prophesying” for Nigeria, now lay claims to have received a message. Rather than join the government in providing palliative measures, we have also seen how some pastors have been asking their members to pay tithes even when those members are unable to venture out to earn their daily bread.”

Okogie said some who ventured out were brutalized by policemen and soldiers who were not held accountable for violating the rights of citizens they were paid to protect, saying “Can’t we reason? Let us think!”

In summary, he stressed that COVID-19 had been a blessing in disguise and exposed the falsehood and hypocrisy “we call politics and religion in Nigeria. May Nigerians become sufficiently wise to read and interpret the signs of the time. For a stitch in time saves nine. Having taught us the hard way, may this pandemic go to bed early, never to rise again.”