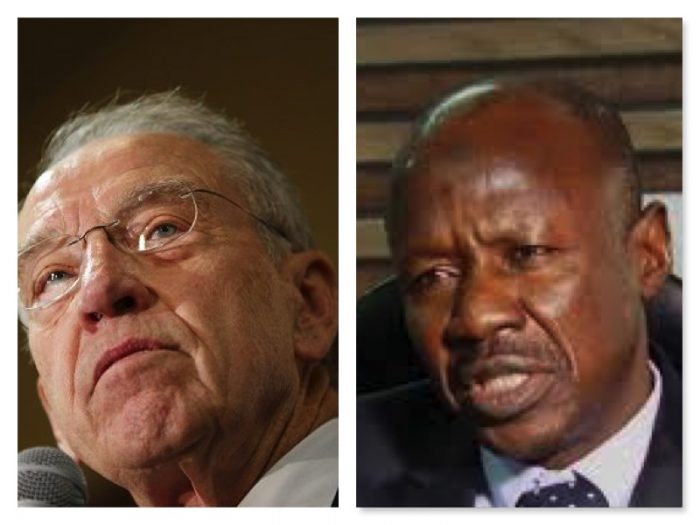 The Economic and Financial Crimes Commission, EFCC has debunked the allegation against the acting chairman of the EFCC, Ibrahim Magu by the chairman of the US Senate Committee on Finance, Charles E. Grassley.

Grassley, the 86 year-old Republican Senator, on 1 April wrote the US Department of Justice calling for the delay in the repatriation of the $300 million Abacha loot to Nigeria.

The Senator called for the delay amidst what he called the increasing concerns over levels of corruption and human rights violations by the Nigerian government, including the persecution of Christians, and detention of human rights activist Omoyele Sowore.

He questioned why the U.S. wants to return the money when Nigeria has refused to assist the U.S. with the forfeiture action against Governor Atiku Bagudu and the lack of safeguards that the money will be used for what has been agreed upon.

“Under the guidance of Attorney General Abubakar Malami and governed by Chairman Ibrahim Magu, the Economic Financial Crimes Commission (EFCC) has served as an enforcement arm against anyone voicing opposition to the Buhari government.

“The EFCC is ostensibly an anti-corruption component of the Buhari Government, yet it has allegedly been involved in the detention of innocent individuals and withheld critical medical care and legal representation all in violation of the Nigerian
Constitution,” Grassley wrote.

But on Friday, EFCC fired back at Grassley.

The Commission said it has been at the forefront of the transparent management of recovered funds and would not be dragged into any controversy over an allegation that has no fact or any iota of proof.

The commission described the allegation against Magu as malicious.

“The allegation clearly has no bearing with the operations of the EFCC nor address the painstaking efforts of Magu in tackling the menace of corruption, without fear or favour”, EFCC spokesman Tony Orilade said.

“The EFCC is involved in the processes of repatriation of the looted $300million by the former Head of State, the late Gen Sani Abacha and quite aware of the tripartite agreement involving Nigeria, the United States and Island of Jersey.

“As an anti-graft agency, the Commission has credible records of managing recovered funds and assets and it is rather unfortunate that the ranking US Senator, in a desperate bid to frustrate the repatriation of the funds, clearly embraced the well-worn antics of some unscrupulous elements in the country, who never succeeded in blackmailing the anti-corruption crusade of President Muhammadu Buhari.

“Even the harshest detractors of Mr. Magu know and always acknowledge his firm and bold handling of the anti- corruption fight which continues to earn him accolades within and outside Nigeria.

“Only recently, the US Federal Bureau of Investigation, FBI, gave an Award of Excellence to Mr. Magu for his unique role in a joint field operation codenamed, “Operation Rewired”. The operation yielded great results internationally in tackling the menace of cyber-crime.

“It is worrisome that a high-ranking US lawmaker of the status of Grassley could not get his facts right nor establish a credible premise of attacking an FBI- celebrated Magu.

“Would the FBI have come out to acknowledge the effectiveness and credibility of the EFCC under Magu’s watch, if such allegation of oppressing opposition to President Buhari’s government had any merit?

“Besides, only recently, former Attorney-General of the Federation (AGF) and Minister of Justice, Mr Mohammed Adoke (SAN), and an opposition PDP politician, poured encomiums on Magu on the visible achievements of the EFCC under his watch. According to Adoke,

“It would interest Sen Grassley to know that three former governors who are ranking members of the ruling All Progressive Congress, APC, which is President Buhari’s party, are currently serving jail terms for corruption. Is the EFCC also persecuting members of the President’s party?

“Grassley evidently lacks any sound basis for linking the EFCC and Magu with any oppressive or separatist agenda against government opposition.

“Records of convictions of the Commission are in the public domain as well as cases before the courts, which can be subjected to un-biased analysis and scrutiny.

“We wish to reiterate that the EFCC under Magu is too focused on the anti- graft agenda of the government to be distracted by such empty claims of the lawmaker. Grassley and his sponsors are clearly on quicksand on this issue.

“The Commission remains focused on its mandate against economic and financial crimes and will not be deterred by spurious allegations from individuals with hidden agenda,”Orilade added.