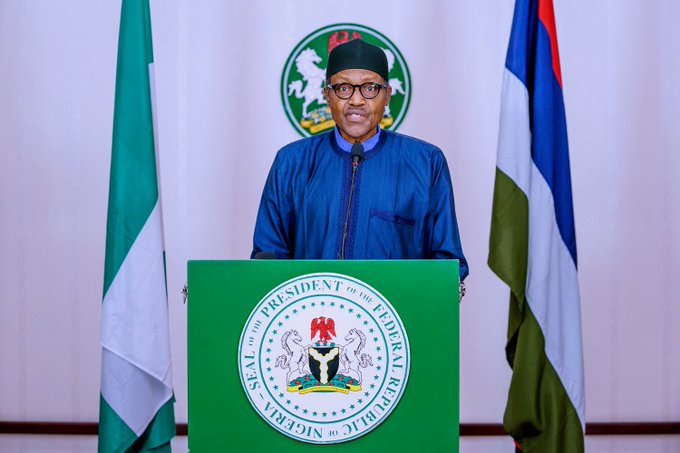 President Muhammadu Buhari on Monday extended by 14 days the lockdown of Lagos, Abuja and Ogun as a result of rising Coronavirus cases.

According to Buhari, in view of rising cases of Coronavirus cases in the country, it had become necessary to extend the current restriction of movement in Lagos and Ogun States as well as the FCT for another 14 days effective from 11:59 pm on Monday, 13th of April, 2020.

“I am therefore once again asking you all to work with Government in this fight,” he said.

The president, in a nationwide broadcast on Monday, lamented that as at this morning, Nigeria had 323 confirmed cases in twenty states and 10 fatalities.

Lagos State remains the epicentre and accounts for 54% of the confirmed cases in Nigeria.

When combined with the FCT, the two locations represent over 71% of the confirmed cases in Nigeria.

“Most of our efforts will continue to focus in these two locations. Majority of the confirmed cases in Lagos and the FCT are individuals with recent international travel history or those that came into contact with returnees from international trips.

“By closing our airports and land borders and putting strict conditions for seaport activities, we have reduced the impact of external factors on our country. However, the increase in the number of States with positive cases is alarming.

“The Nigeria Centre for Disease Control has informed me that, a large proportion of new infections are now occurring in our communities, through person-to-person contacts. So we must pay attention to the danger of close contact between person to person.

“Today, the cessation of movement, physical distancing measures and the prohibition of mass gatherings remain the most efficient and effective way of reducing the transmission of the virus. By sustaining these measures, combined with extensive testing and contact tracing, we can take control and limit the spread of the disease,” he said.

The president said government’s approach to the virus remains, first, to protect the lives of Nigerians and residents living here and second, to preserve the livelihoods of workers and business owners.

“With this in mind and having carefully considered the briefings and Report from the Presidential Task Force and the various options offered, it has become necessary to extend the current restriction of movement in Lagos and Ogun States as well as the FCT for another 14 days effective from 11:59 pm on Monday, 13th of April, 2020. I am therefore once again asking you all to work with Government in this fight.

“This is not a joke. It is a matter of life and death. Mosques in Makkah and Madina have been closed. The Pope celebrated Mass on an empty St. Peter’s Square. The famous Notre Dame cathedral in Paris held Easter Mass with less than 10 people. India, Italy and France are in complete lockdown. Other countries are in the process of following suit. We cannot be lax,” he added.

He said the renewed lockdown was a difficult decision to take.

But he said he was convinced it was the right decision, as the evidence is clear.

He warned that the repercussions of any premature end to the lockdown action were unimaginable.

“We must not lose the gains achieved thus far. We must not allow a rapid increase in community transmission. We must endure a little longer.

“I will therefore take this opportunity to urge you all to notify the relevant authorities if you or your loved ones develop any symptoms.

“I will also ask our health care professionals to redouble their efforts to identify all suspected cases, bring them into care and prevent transmission to others.

“No country can afford the full impact of a sustained restriction of movement on its economy.

“I am fully aware of the great difficulties experienced especially by those who earn a daily wage such as traders, day-workers, artisans and manual workers.

“For this group, their sustenance depends on their ability to go out. Their livelihoods depend on them mingling with others and about seeking work. But despite these realities we must not change the restrictions.”

He said in the past two weeks, the government announced palliative measures such as food distribution, cash transfers and loans repayment waivers to ease the pains of its restrictive policies during this difficult time and that the palliatives would be sustained.

He said a technical committee was working on this and would submit a report to him by the end of this week.

Buhari said the security agencies had risen to the challenges posed by this unprecedented situation with gallantry and urged them to continue to maintain utmost vigilance, firmness as well as restraint in enforcing the restriction orders while not neglecting statutory security responsibilities.

He charged Nigerians to follow the instructions on social distancing, saying that the irresponsibility of the few could lead to the death of the many, adding that their freedom ended where other people’s rights began.

“The response of our State Governors has been particularly impressive, especially in aligning their policies and actions to those of the Federal Government.

“In the coming weeks, I want to assure you that the Federal Government, through the Presidential Task Force, will do whatever it takes to support you in this very difficult period. I have no doubt that, by working together and carefully following the rules, we shall get over this pandemic,” he said.

Buhari said to ensure the economy adapted to this new reality, he had directed the Ministers of Industry, Trade and Investment, Communication and Digital Economy, Science and Technology, Transportation, Aviation, Interior, Health, Works and Housing, Labour and Employment and Education to jointly develop a comprehensive policy for a “Nigerian economy functioning with COVID-19”.

He stated that the Ministers would be supported by the Presidential Economic Advisory Council and Economic Sustainability Committee in executing this mandate.

“I am also directing the Minister of Agriculture and Rural Development, the National Security Adviser, the Vice Chairman, National Food Security Council and the Chairman, Presidential Fertiliser Initiative to work with the Presidential Task Force on COVID-19 to ensure the impact of this pandemic on our 2020 farming season is minimized,” he said.