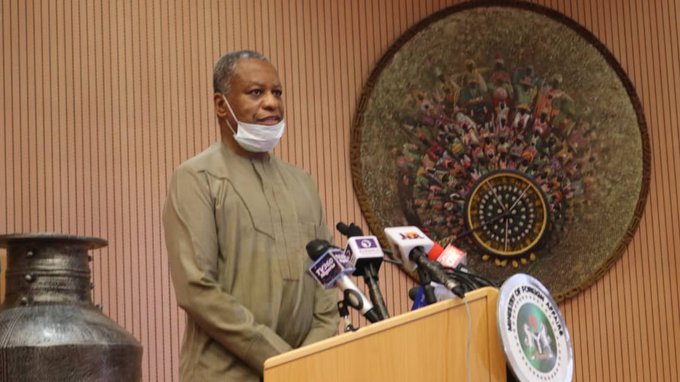 Minister of Foreign Affairs, Geoffrey Onyeama, has joined other Nigerians to mourn Mallam Abba Kyari, his best man and godfather of his son.

Onyeama described the late chief of staff to President Buhari as a close friend.

Onyeama gave the condolence in a statement via his official twitter handle @geoffreyonyeama on Saturday.

“In deep shock and sorrow at the passing of Abba Kyari, a best friend and brother, chief of staff to President @MBuhari.

Also in a statement, Ms Sarah Sanda, Special Assistant, Media to the Minister, said that Abba Kyari and Onyeama had been friends since 1977.

They were classmates at the University of Warwick, Coventry, England.

Kyari read Sociology at Warwick and graduated in 1980.

He then went to University of Cambridge to read law, graduating in 1983.

Sarah Sanda recalled that Abba Kyari was the “best man” at Onyeama’s wedding, and godfather to his first son.

The Chief of Staff to the President died of COVID-19 complications.

Kyari had tested positive to coronavirus after he returned from official engagements in Germany and Egypt.