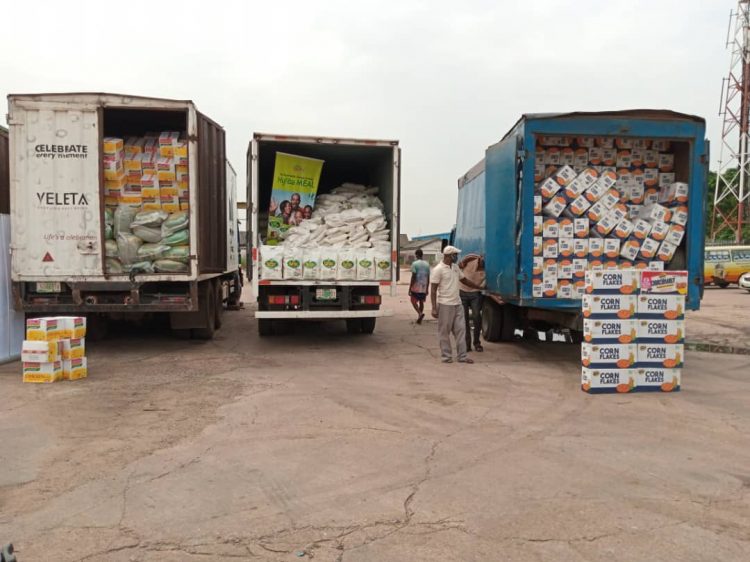 Some of the food items

The Lebanese Community in Lagos has donated eight truck load of various food items and an ambulance worth N82.5 million to the Lagos State Government to support the fight against the COVID-19 pandemic in the state.

He pointed out that the well calculated efforts of the State Government in its fight against the Coronavirus stirred up the commitment of the Lebanese Community in Lagos to support the needy in this period.

“I thank our Governor, Mr. Babajide Sanwo-Olu and we commend the State’s efforts to control the COVID-19 pandemic. We are here accompanied by some prominent members of the Lebanese Community; not just to convey to you a certain donation in kind, but practically to show our brothers and sisters in Nigeria our commitment to the well-being of Nigeria and its people, to stand up beside them in this hard moment. We look forward to a brighter future to reverse all collateral damage of this COVID-19 crisis. We will always be together whether in bad moment or happy one,” Nicolas asserted.

In the same vein, the Chairman of the Lebanese Community in Lagos, Mr. Faysal El Khalil noted that the donation was a token of appreciation for their country of choice, Nigeria, which has accepted them as citizens of the country.

El Khalil averred that Nigeria has provided many members of the Lebanese community opportunities that have helped them build a good and bright future for themselves and grandchildren.

“Whatever we are doing today or donating today is nothing but a token of our appreciation for our country of choice Nigeria that has taken us as one of theirs. Nigeria has provided many of us with opportunities that have helped us to build a good and bright future for ourselves and our grandchildren and theirs.

“Many of us in the Lebanese community are second, third or even fourth generations. So they are Nigerians indeed and they are proud to be so. What we are doing today is nothing but to say thank you Nigeria, thank you Lagos State,” he said.

He pointed out that the community would always be appreciative of the support and cooperation of Nigeria as a whole, adding that the Community has setup an educational endowment for the benefits of Nigerians.

“One of the things that we have recently done is that we have launched an endowment with the American University of Beirut which is one of the best Universities in the Middle East and one of the outstanding Universities in the World whereby every year, a Nigerian will be selected to go and do a MBA Programme at the American University of Beirut, all expenses paid: tuition, boarding, lodgment, food and travel.

“About seven years ago, we also launched a similar scholarship programme in the best business school that is well known in the world, the Harvard Business School, where every year, a Nigerian goes to the HBS and does his 2-year MBA Programme. In fact, as we speak, there are at least 7 Nigerians who have done their MBA and have returned to Nigeria,” El Khalil averred.

The Commissioner explained that the State Government has reached out to 440,000 households through its COVID-19 Emergency Food Response Initiative, a palliative for the aged, vulnerable, low income earners and people living with disabilities.

Lawal explained that the pandemic had a negative effect on the financial and economic status of Lagosians which was why the State Government birthed the idea of the Emergency Food Response Initiative to cater to the needs of the aged, vulnerable, people living with disabilities, and daily income earners who might have been directly affected by the lockdown.

“The pandemic Corona Virus is novel and it has a lot of negative impact on the economy globally, Lagos inclusive. We as policy makers felt that with the economic lockdown that the pandemic triggered, we decided to come up with food palliatives because we know that over 60% of the population of Lagos constitute the informal sector, whether they’re in the transportation business, artisans or market men and women; those are people that are directly affected by the lockdown because they live on daily wages, if they do not go out in a day, they earn no income,” Lawal noted.

The Commissioner stressed that the distribution of the relief materials would not stop especially as well meaning individuals and organizations such as the Lebanese Community were supporting the State Government’s Initiative.

While appreciating the generosity of the Lebanese Community, Lawal assured Lagosians, especially those households that are yet to receive these stimulus packages that with due diligence, these food items would be distributed to get to those who really need them.

“We are honoured that you trust us to distribute these food packs and we promise that we will continue to be accountable and transparent. We appeal to Lagosians who are yet to receive these stimulus packages and we assure them that we will get to you.

“It is worthy of note however that no matter how much we try, we cannot get to every household because Lagos alone has a population of about 24 million people in over 4 million households. That is why we are lucky to have people like you who have decided to support the initiative of the State Government and a lot of other Lagosians who are doing their bit by feeding the vulnerable in their Communities. We say that we see all you do and we are sincerely grateful,” Lawal expressed.

The Commissioner disclosed that the Lebanese Community in Lagos had been doing a lot of good work for the people of Lagos State in terms of job creation and had contributed immensely to the industrialization of the State through investments and trade.