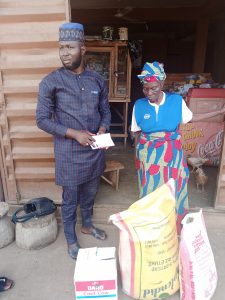 The Federal Ministry of Youth and Sports Development has placed the mother of late Super Eagles striker, Rashidi Yekini, Alhaja Sikiratu, on a monthly stipend of N10,000.

A representative of the Minister of Sports, Mr. Olaitan Shittu, disclosed this on Wednesday when he donated Ramadan gifts on behalf of the minister to the aged mother.

Sports minister, Mr. Sunday Dare donated the sum of N50,000 as part of the Ramadan gifts to Yekini’s mother.

Other donated items include a 50 kg bag of rice, 10 kg bag of wheat, and six tins of Milo beverage drink.

Responding, Alhaja Yekini, who spoke in her local dialect (Yoruba), thanked the minister and prayed fervently for him.

Besides playing for Nigeria, he also played in six other countries including Ivory Coast.

He scored 37 goals as a Nigerian international from 58 games and represented the nation in five major tournaments, including two World Cups.