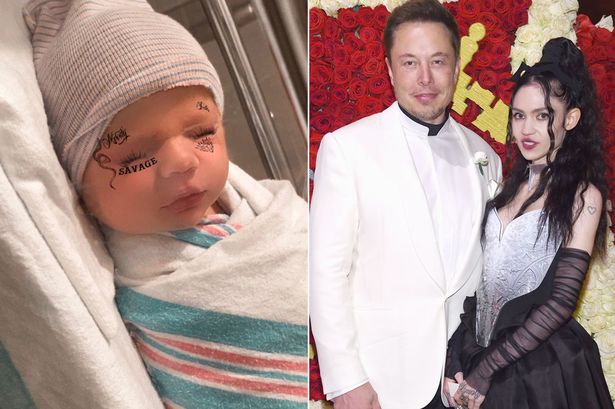 Canadian singer, Claire Elise Boucher also known as Gimes has confirmed that she and partner Elon Musk have named their newborn son, X Æ A-12.

The 32-year-old singer, who gave birth on Monday, revealed the meaning of their son’s bizarre name via Twitter.

‘Æ is the the Elven spelling of of Ai (love &/or Artificial intelligence),’ she stated.

The final symbol in the name, Grimes explained, is a reference the A-12 aircraft built for the CIA in the 1960s.

‘A-12 = precursor to SR-17 (our favorite aircraft). No weapons, no defenses, just speed. Great in battle, but non-violent,’ the star stated.

Grimes also added that A additionally stands for ‘Archangel’, ‘her favorite song’.

Tesla CEO Elon Musk, 48, announced the birth of X Æ A-12 on Tuesday. He shared a photo of himself holding the newborn in his arms, and wrote: ‘Mom and baby all good’.

When someone asked the baby’s name, Musk replied “X Æ A-12 Musk” and shared a photo of the baby with a filter that gave the newborn face tattoos.

“Never too young for some ink haha,” he joked.

This is the couple’s first child together. Musk has five other children — twins Griffin and Xavier and triplets Damian, Saxon and Kai — from a previous marriage.