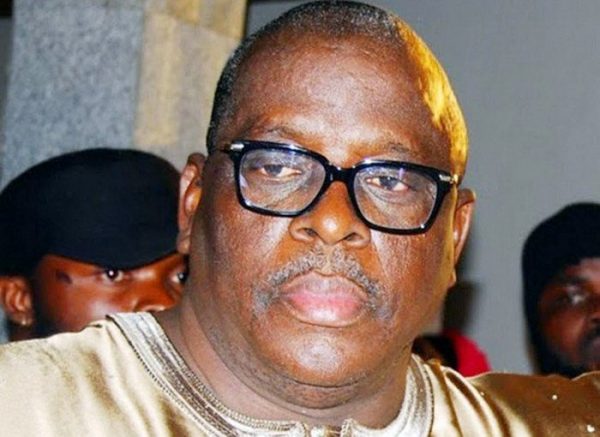 Justice Okon Abang of the Federal High Court, Abuja, on Thursday, restrained the Federal Government from extraditing Sen. Buruji Kashamu, to the U.S. to answer allegation of drug trafficking.

Delivering judgment, Justice Abang, held that the Federal Government or its agents could not validly initiate extradition proceedings against Kashamu.

This he said, was because of subsisting judgments and orders in favour of the plaintiff.

According to him, the judgments had remained unchallenged.

The second was delivered on 1 July 2016 given by the Federal High Court , Abuja.

Both prohibited Kashamu’s extradition on account of the U.S. drug allegation.

Kashamu was the plaintiff in the latest suit, while the Attorney General of the Federation (AGF) and the National Drug Law Enforcement Agency (NDLEA) were defendants.

Kashamu challenged the propriety of a letter by Shehu Bodinga of the Central Control Unit in the AGF’s office.

The letter requested the U.S. Embassy in Nigeria to forward a fresh extradition application after the judgment by Justice Gabriel Kolawole voided an earlier extradition proceedings.

Justice Abang held that Justice Kolawole’s judgment, was based on the two earlier judgments of the Federal High Court.

The judgments declared as unlawful all attempts to extradite Kashamu in view of the judgements by two British courts.

The British courts held that Kashamu was not the person involved in the drug crime in the U.S.

However, he said the AGF failed to appeal the other judgment in the suit No: 49/2010.

Abang held that, since the judgment was not challenged, it remained alive along with the restraining order.

The judge also held that since the subsequent judgment by Justice Kolawole was also not appealed, it remained subsisting and binding on all parties.

In the earlier part of the judgment, Abang set aside the letter written by Bodinga.

He ruled that neither the AGF nor his agent has the power to apply to a foreign country, to bring an extradition request for a Nigerian where that country has not made such an application.

The judge noted the decisions of the Court of Appeal in the two judgments, on which Justice Gabriel Kolawole was based, appeared conflicting.

“The effect of the Court of Appeal dismissing the appeal against the judgment in suit No: 49/2010 is that the said judgment has validated in all its ramifications, inclusive of the restraining order in that judgment.

“The fact that the restraining order in the judgment in suit 49/2010 dated Jan. 6, 2014 is still valid and subsisting, it is not a matter of sentiment.

“In fact, it is not a political issue. We don’t practice democracy in court, no matter how the politicians look at it. The politicians can look at it the way it favours them.

“But, sitting as a court of law, where there is no appeal against a judgment, that judgment subsists.

“This is an issue of law. Where there is no appeal against a judgment, there is nothing anybody can do in a democratic setting.

“If the restraining order ought not to have been made, the AGF ought to have appealed against it.

“The Attorney-General of the Federation, with the greatest respect to him, cannot pretend that the restraining order is no longer subsisting.

“The 1st defendant (AGF) cannot assume that the order was not made in good faith even when he participated in the proceedings.

“Why did the AG not appeal that judgment even when the Court of Appeal recently dismissed an appeal against the judgment?,” he asked.

The judge said the the current AGF was not in office when the judgment was delivered on Jan. 6, 2014. “I really sympathise with him.”

“In my respective view, he can not now seek to take steps against that judgment when his predecessor in office did not see any need to appeal against the judgment or did not even see anything wrong with the judgment.

“Except if the decision of the Court of Appeal on Sept. 20, 2018, dismissing the appeal against the judgement in suit 49/2010 is validly set aside on an appeal to the Supreme Court, the AGF cannot validly take steps that run contrary to the subsisting judgment of this court.

“That will be an invitation to anarchy,” the judge ruled.