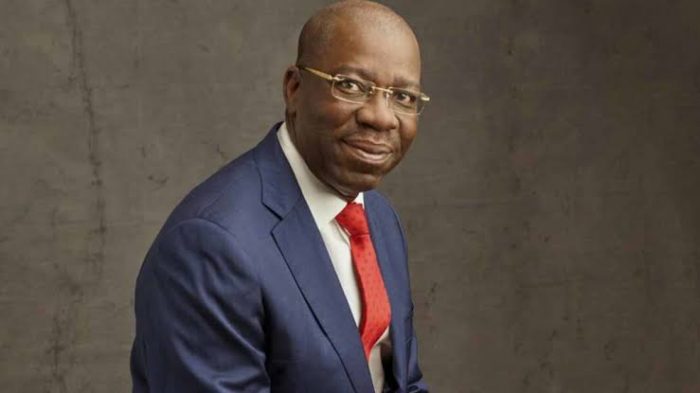 All Progressives Congress, APC leaders in Edo State on Thursday described the Governor of the state, Godwin Obaseki as a serial liar for dragging the name of the party’s Chairman, Adams Oshiomhole into the mock primary that he was not involved.

Apparently peeved by the governor’s comment calling on the Federal Government to hold Oshiomhole responsible if he fails to curb spread of the Covid-19 in the state.

The leaders poopoohed his claim declaring that despite collecting N350billion from various sources yet there’s nothing on ground to show.

“We, the underlisted, represent the several thousands of APC leaders, stakeholders and members in Edo State whose determination to replace Mr Godwin Obaseki in the forthcoming gubernatorial election is unwavering. Not every leader deserving to endorse the following statement could have their names included hereunder for want of space.

“Our attention has been drawn several times to publications by Governor Godwin Obaseki and his agents in a section of the press, alleging that the National Chairman of APC, organized a “mock primary” in Edo State on April 30, 2020, purportedly to pick a candidate for the Gubernatorial election in Edo State. He further alleged that the meeting had over 50 persons in attendance, thereby flouting his government’s directives on the fight against Covid-19 pandemic in the state.

“We hereby vehemently deny any involvement of Comrade Adams Oshiomhole in our activities. We also state emphatically that there was no crowded meeting of 20 persons or more by this body of APC Leaders anywhere in Edo State in recent time. We hereby challenge Mr Godwin Obaseki to prove his allegation of a crowded “meeting of more than 50 persons” by releasing a video of such event.

“A look at the list of those who issued this statement on behalf of our teeming members will expose the rudeness in describing us as puppets of Oshiomhole by Mr Obaseki in the statement under reference.

“The twisted narrative by Mr Obaseki, is meant to drag the National Chairman, Comrade Oshiomhole’s name into our activities in order to blackmail him. This is an ongoing but over used strategy for his ill-fated campaign for second tenure.

“We state unequivocally that we are not intimidated by Mr Obaseki’s hackneyed bashing of and disrespect for the former Governor, Comrade Adams Oshiomhole, whose excellent performance in government remains the selling points for our party till date.

“Contrary to the resort to personalised attacks by Godwin Obaseki on the National Chairman, who is not contesting any election, we are confronting Mr Obaseki with the evidence of bad governance, mindless embezzlement of state funds, destruction of democratic culture, wicked demonization of those on whose backs he rose to power and systematic destruction of APC, the platform that brought him to power.”

As at April 2020, Edo State Government under Godwin Obaseki has netted about N350bn (Three hundred and fifty billion Naira). The bulk is made up of Federation Account Allocation Committee (FAAC) disbursements and Internally Generated Revenue, all amounting to about N300bn, Bail Out fund N17.5bn and Paris Club Excess deductions Refund, enhanced by exchange rate differentials, making up the balance.

Against this huge funds, never seen before in Edo State, there are practically no projects to justify the expenditure of the huge receipts.
All promises, celebrated signing of MOUs, deceptive adverts inviting tenders and even inviting the Vice President on state visit to flag off construction of INDUSTRIAL PARK, came to nothing.

There is not a single project worthy of commissioning as Mr Obaseki moves towards the end of his tenure.

Even in the current fight against Covid-19, he does not care about the sufferings of the people but he is busy converting the opportunity for embezzlement, embarking on political campaign in the 192 wards under the guise of personal sensitization campaign against coronavirus. The state was shocked when he announced they had already spent over One billion Naira on the pandemic within two weeks.

Till today there is no lockdown in Edo state in order to avoid spending on palliatives. Yet he moved markets to school premises in the entire state with a promise to fumigate the markets statewide. No fumigation has been carried out and the school premises are fast becoming Refuse dumps.

Huge crowds are crammed into whatever space in the schools without social distancing. He ordered people to wear face-masks but his government did not provide any for the poor masses. The number of infected people is growing exponentially, he doesn’t care.

DESTRUCTION OF DEMOCRATIC CULTURE AND INSTITUTIONS

House of Assembly elections were held on the 9th of March 2019 and APC won all 24 seats, but till today Mr Godwin Obaseki would not properly make a proclamation and facilitate the orderly swearing in of every member. He spirited away 10 of the members who were cajoled to choose his preferred member as Speaker.

A caricature of the solemn event was conducted at night for those 10 who were funnily clad as shown on social media. 14 members-elect have been debarred from exercising their mandate till today.

Thugs were deployed to hound them into exile, for insisting on doing the right thing democratically. Worse still, he has killed the democratic principle of check and balances in Edo State Government rendered 14 state constituencies unrepresented.

Any one who disagrees with Obaseki in Edo State is endangered. Thugs are deployed at will and agencies of government are sent as hounds to make life miserable for such persons. Bombs have been thrown into people’s homes resulting in massive destructions but curiously no arrests were made.

Mr Obaseki attempted to annex the party secretariat as a department of his Government House and the dispute arising from that, led him to unilaterally purport to change the party executives.

He and his government have refused to be guided by the party’s constitution and he rushes to court to procure injunctions to frustrate party discipline without exhausting internal mechanism for resolution of dispute.

He has actively frustrated the admission of new members from time to time.

Given these and many other destructive tendencies, We, as respected leaders of the party are consulting among ourselves and we will come up with one of the many Aspirants, whom we will mobilize and vote for at the forthcoming primaries in June to replace Mr Godwin Obaseki.

Lies against and even blackmail of Comrade Oshiomhole by Mr Obaseki will not stop us from rescuing our dear State from his misrule.