SERAP to Wike: You displayed rascality in demolishing hotels 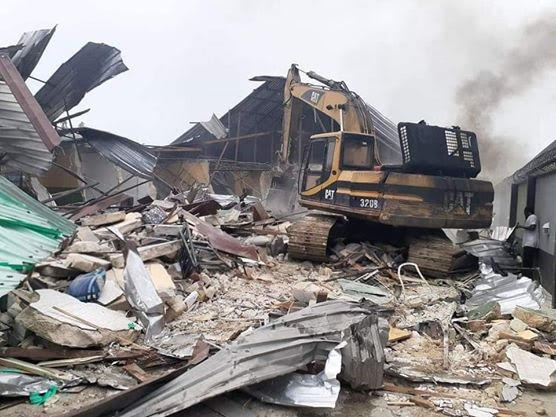 One of the demolished hotels

The Socio-Economic Right and Accountability Project, SERAP, has reacted to the demolition of two hotels by the Rivers State Governor, Nyesom Wike, describing the action as executive rascality.

The rights body condemned the demolition of Prodest Hotel by Wike, and vowed to take action.

“We condemn the reported demolition of Prodest Hotel by Gov Wike, Rivers State.

“We’re taking legal action to hold him & his govt. to account for illegal actions.

“The demolition of Prodest Hotel is forced evictions and in violation of article 11 of the International Covenant on Economic, Social and Cultural Rights and other human rights treaties to which Nigeria is a state party,” SERAP said on its twitter handle.

Wike had on Sunday supervised the demolition of two hotels in Eleme and Onne for violating the Executive Order 6 of the state government, which banned the operations of hotels amid the lockdown in order to check the spread of coronavirus.

“Government has no alternative but to apply the Executive order, which I signed before the lockdown of Obio/Akpor and Port Harcourt. I called all the traditional rulers and council chairmen and told them to ensure that no hotel operates in the state,” he said.