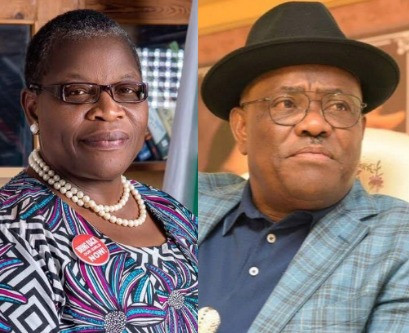 Oby Ezekwesili, former Nigerian Minister of Education, has reacted to the decision of the Rivers state government to demolish two hotels in the state for flouting the lockdown order.

Wike on Sunday monitored the demolition of two hotels for flouting the lockdown order he imposed as part of measures to curtail the spread of Coronavirus in the state.

The hotels are: Prodest Hotel, Alode, Eleme, and Etemeteh Hotel in Onne both in Eleme Government local area.

However, many Nigerians expressed outrage over Wike’s action, saying that the governor was simply power-drunk.

Also reacting to the news, Ezekwesili in a series of tweets opined that ”Power in the hands of persons without self-discipline in the absence of social accountability creates monsters in any society.”

She further advised the owners of the hotels that were destroyed to sue the state government.

Read her tweets below;

Power in the hands of persons without self-discipline in the absence of social accountability creates monsters in any society.

Democratic ethos, values, principles and nuances totally forbid the kind of action Governor Wike of Rivers took in demolishing a hotel no matter whatever “Executive Order” he travels signed.
His action breeds anarchy in society and is condemnable.
There is the morning after.