The pain in my heart over Justice Oluwa's demise 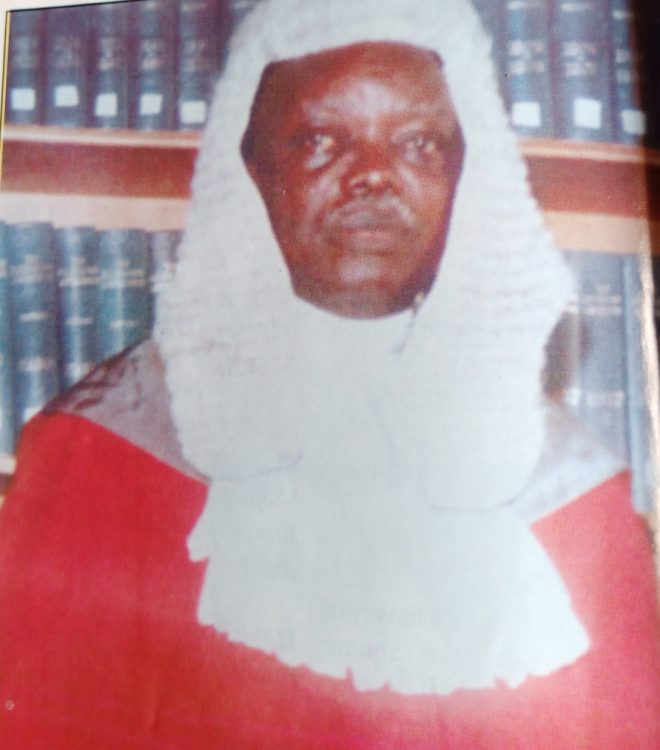 The death of revered retired judge of the Lagos State High Court, Hon. Justice Isiaka Ishola Oluwa on Saturday left a sour taste in my mouth and a deep pain in my heart not on account of his age (having died at ripe age of 102) or his astonishing and impressive record of service to humanity, but on the ground of failure of Lagos State to kick start the process of bequeathing a world class infrastructure to the people that would have created thousands of jobs directly and indirectly, and above all help to greatly address one of the major challenges the state is grappling with today.

I will come to the project in question in the course of this piece which seriously troubled my peace while weaving it together owing to the missed opportunity, especially in terms of tremendous positive impact it would have had not just on the economy of Lagos, but Nigeria and the West Africa sub-region.

During my active days as a judiciary correspondent for Independent Newspapers Limited (Publishers of Daily Independent, Sunday Independent and Saturday Independent), I had the opportunity of covering the Federal High Court, Court of Appeal, Magistrate Courts and Lagos High Court where i was exposed to so much information about judges and lawyers, including those serving, retired, living and the dead.

One of those revered judges that stood out as exceptionally brilliant, incorruptible, upright, principled and passionate about development of Lagos State is the late Justice Oluwa. Baba contributed immensely to the advancement of our jurisprudence and hardly were his judgments upturned by superior courts.

And so it was a big thing for me when I had the opportunity to meet Baba in person three years ago while working on a documentary for an international symposium put together by a foremost indigenous social club in Lagos State, Eko Club to celebrate Lagos at 50.

Justice Oluwa, as one of the founding fathers of the club, was listed by the President of Eko Club, Chief Tunde Fanimokun as one of the personalities I should interview for the documentary. The interview with Baba was facilitated by Mr Oluwole Pereira, former General Secretary, Association of Lagos State Indigenes, who is also passionate about development of the State and welfare of old people.

Two weeks after the interview session, Justice Oluwa, who was 99-years-old then, called for me again and said there was an issue he had been keeping to himself for long and that he wanted to say it out for the benefit of Lagos State.

He told me in confidence that when General Yakubu Gowon was the Head of State between 1966 and 1975, the former Chief Justice of Nigeria, Justice Adetokunbo Ademola (now late) invited him and two others for a meeting at Metropolitan Club in Lagos where they met with two white men from England who told them their company was interested in building Underground Tunnel to connect Agege with Race Course (Tafewa Balewa Square).

The massively ambitious project was to be executed then solely by the foreign company after which they would run it for some years and hand it over to government based on a build-operate-transfer model.

According to Baba Oluwa, they took up the matter with the then Head of State for permission for the commencement of the project, and in turn, General Gowon told them that he needed time to discuss it with the Federal Cabinet.

But after the discussion, Baba Oluwa told me in confidence that politics, ethnicity and another issue (which he pleaded should not be made public), made the then Federal Cabinet members to reject the project, and the white men left the country. Similar project was later to be executed by the same company in Hong Kong.

Baba said the major reason why he called me to escalate the matter was that he still had contact with a representative of the company, and he would love the State Government to reconsider pursuing the botched Lagos underground tunnel project.

I immediately took up the matter with some influential members of government then and in a bid to make it official, I wrote a letter and reminder, but unfortunately it was not considered as a priority.

The late Justice Oluwa was uniquely passionate about development of Lagos State. Many did not know that Baba was a consummate Agric expert who established the Faculty of Agriculture, University of Ibadan with one million British pounds and speaks Ibo, Yoruba and Hausa fluently in his lifetime. His decision to study law and later became High Court judge was borne out of sincere and genuine desire to effect positive changes.

No doubt, the missed opportunity of the underground tunnel is painful, and one can only hope that such project will be pursued with the required vigor and candor next time in the interest of the people.

-Opeseitan is a Lagos-based journalist.