One dead as rival cult groups clash in Port Harcourt 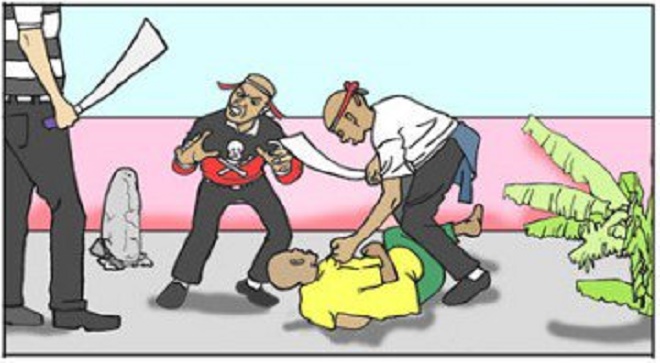 At least one person was shot dead as rival cult clash leading to an uncontrollable mayhem unleashed on the residents of the densely populated Mile 3 axis of Ikwerre road Diobu, Port Harcourt on Friday.

This happened after some suspected cultists went on a rampage, robbing residents and vandalising motors plying the road.

It was learnt that the protest was sparked off after a suspected Deygbam cult member identified as Leo was shot dead by suspected members of rival Iceland cult in the morning of Friday, May 15, 2020, at Bishop Okoye Street, Mile 3 Diobu, Port Harcourt.

Various eyewitness accounts claimed that four men reportedly riding a Toyota saloon car on getting to where the said Leo was standing, opened fire at him and sped off.

We gathered that persons suspected to be his cult members put him in a wheelbarrow and took him to a compound in Chigbu street where some of his friends reside.

The spokesperson of Rivers State Police Command, DSP Nnamdi Omoni, confirmed the incident but could not give details.

In a similar development, Diobu Vigilante Group alleged that they were attacked by hoodlums before Police Officers arrived the scene of the fracas.

The Chief Security Officer, CSO, of Diobu Vigilante Group Rumu-Elechi Community unit, Comrade Godstime Ihunwo, alleged that Deygbam cult members attacked him and his men before the Divisional Police Officer in charge of Nkpolu Division and his men arrived.

Ihunwo stated that while they were trying to contain the situation that led to the killing of a vegetable seller at mile 3 market, the suspected Deygbam boys who were on rampage attacked and injured them in the presence of the Police and none of them were arrested.

The CSO explained that the suspected Degbam boys left, issuing a direct threat that they must kill him and his men for the death of their member.

Ihunwo pointed out that it has been a reoccurring decimal as he sensed there is a backup, which has emboldened the hoodlums to commit crimes unchallenged and the government is not assisting the vigilante in any way and it will be worse if nothing is done in future.

The cult war between suspected Deygbam and Iceland Cult groups in Mile 3, Diobu over who collects daily levies from traders so Bishop Okoye Street, popularly known as ‘matching ground’ started two weeks ago and it claimed two lives, One Chisco Uzoma, a suspected Iceland cult member and one Saidu Waisu, a suspected Deygbam Cult member.

The spokesperson of Rivers State Police Command, DSP Nnamdi Omoni had then confirmed the killing of Chisco Uzoma. But in the case of Saidu Waisu, he promised to get a detailed report after consulting with the DPO in Nkpolu.  

Meanwhile, the residents of No. 8, Chigbu street where the cultists abandoned the corpse of their member, also called on Police authorities to come and move the corpse.

It would be noted the Diobu had earlier been under lockdown on the orders of the Rivers State Governor, Nyesom Wike a few weeks ago before the entire Obio-Akpor and Port Harcourt City local government areas followed suit to contain the spread of Coronavirus.