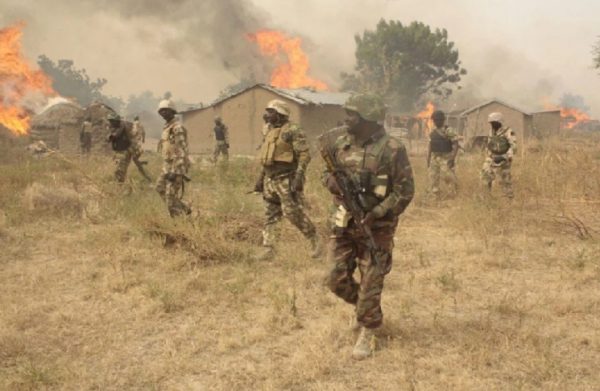 The Defence Headquarters said that troops of Operation Whirl Stroke have succeeded in killing two gang members in Benue, and also arrested members of a militia group in Nasarawa state.

Maj.-Gen. John Enenche, the coordinator of Defence Media Operation disclosed this in a statement on Sunday in Abuja.

Enenche said the success was recorded when combined troops of Sector 2 deployed in Gbise and Zaki Biam in Benue and Sector 4 from Taraba State raided the hideout of Gana in Mtan village in Utenge Council Ward of Katsina-Ala Local Government Area (LGA) on Saturday.

He added that while two members of the gang were killed in the encounter, others fled with various degrees of gunshot wounds.

According to him, exploitation operation revealed that Gana narrowly escaped death with gunshot wounds.

“Gana’s personal belongings, other items and thatched houses were destroyed,” he said.

The Coordinator further disclosed that the troops of Sector 3 deployed at Ondori in Doma LGA of Nasarawa State raided the Bassa Militia camp at Kpelebewa village in Rukubi area and arrested seven gang members.

He added that the raid followed credible information that the militia group were planning to attack a Tiv community over a land dispute.

According to him, the troops apprehended seven members of the militia dressed in red shirts in the camp.

“Other items are one dagger, poisoned bows and arrows, desert camouflage head gears and pouch, six phone handsets and some charms.

“The suspects are currently undergoing interrogation to be handed over to the police.

“The Military High Command congratulates the Troops and requests the general public to continue to provide the Armed Forces with credible information to facilitate its operations in the country,” he said.