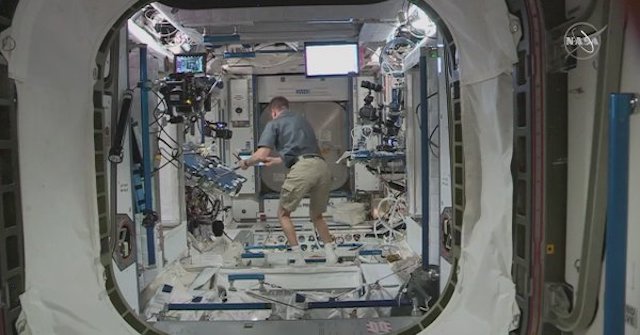 The two NASA astronauts aboard the SpaceX Crew Dragon docked at the International Space Station today.

This was after they left the Earth 19 hours ago from Florida.

Their spaceship was the first crewed ship launched from American soil since 2011..

Robert L. Behnken and Douglas G. Hurley were launched into orbit on Saturday atop of a SpaceX rocket.

The pair took a 19-hour trip around the Earth as their spacecraft caught up with the orbital outpost before their capsule successfully docked at the International Space Station Sunday morning.

Behnken and Hurley will now wait for a few hours while tests are completed to make sure the seals between the spacecraft and the space station are airtight.

They are expected to remain at the space station for at least one month.

But they could stay for up to four months to help other astronauts complete work and spacewalks there.

Saturday’s launch was the fruition of a partnership between SpaceX and NASA.

The last time NASA astronauts departed American soil for the International Space Station was in 2011 before the agency’s space shuttles were retired.–Space.com