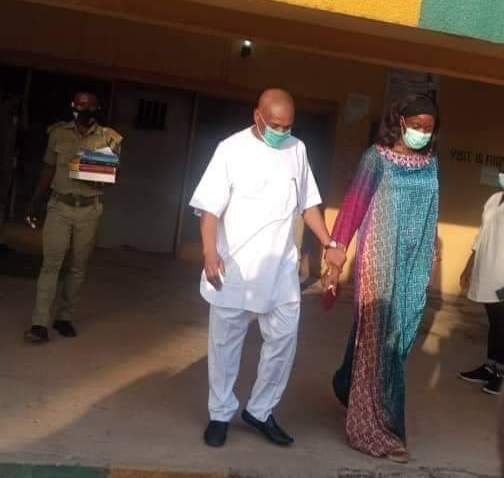 The former governor, now a serving senator, was reportedly set free from prison around 7:30pm.

The Federal High Court in Lagos, had on Tuesday ordered the immediate release of  Kalu from Kuje prison.

The court also ordered the Economic and Financial Crimes Commission, EFCC, to immediately put machinery in motion for the retrial of the former governor.

The court further ordered that his trial should start afresh along side the former Director of Finance in Abia State Government  House, Ude Jones Udeogu in line with the judgement of the Supreme  Court that declared Udeogu’s trial, conviction and sentence a nullity.

Orji is serving a 12-year jail term at the Correctional Service Centre in Kuje, Abuja for looting N7.65 billion belonging to the Abia State Government.

The former Governor now a Senator of the Federal Republic of Nigeria hired a 12-man team of lawyers, to file  application for his release.

The application pending before Justice Mohammed Liman was filed  on May 12 asking the court to nullify his conviction sentence and release  him.

Justice Mohammed Idris  who was elevated to Court of Appeal, on December 5, 2019, convicted Kalu and a former Director of Finance in the Abia State Government House, Ude Jones Udeogu of the offence of fraud.

Udeogu was sentenced to 10 years imprisonment.
However, following Udeogu’s appeal, the Supreme Court on May 8, 2020 declared that the fiat issued to Justice Idris to conclude the case after he had been elevated to the Court of Appeal was “a nullity”.
The apex court set aside Idris’ verdict “as it  relates to the appellant (Udeogu)’s conviction.
Consequently, the court  ordered that Udeogu should be released  and the retrial of his case.
However, Kalu who was not part of this appeal contended that no legal basis existed for his continued incarceration following the Supreme Court’s judgment which declared the whole trial a nullity and freed Udeogu.
Tags:   Orji Kalu