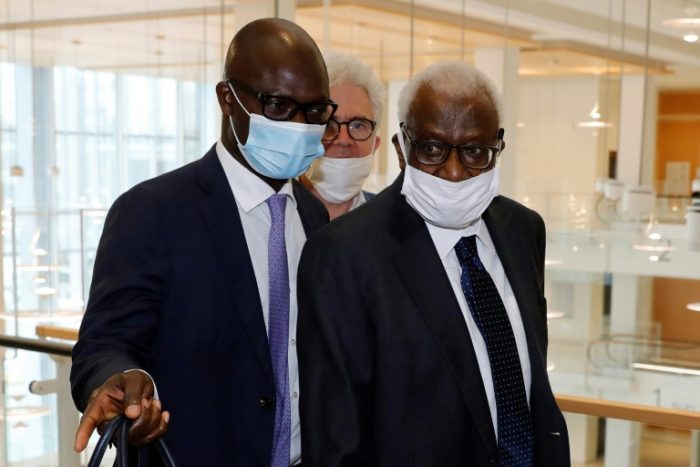 The French prosecutors are alleging that the $1.5million bribe that former IAAF chief, Lamine Diack obtained from the Russians, was used to back Senegal’s President Macky Sall campaign for the 2012 election.

Sall won the election but the IAAF’s anti-doping arm went on to cover up or delay offences by 23 Russians athletes.

This enabled the Russians to compete in the London 2012 Olympics and World Athletics Championships in 2013.

The stunning revelation was contained in court papers as the trial of Lamine Diack, former IAAF chief from 1999 till 2015 began on Monday in Paris.

The former anti-doping chief of IAAF, Gabriel Dolle told the French court that Diack urged him to bend the rules on Russian doping cases to avoid “a scandal” that would scare off sponsors.

The Frenchman told the trial he had been trying to find a compromise between the “higher interest” of the IAAF, since renamed World Athletics, and doping suspicions surrounding Russian athletes.

In late 2011 and early 2012, the IAAF drew up a list of 23 Russian athletes whose anti-doping tests gave cause for concern.

Dolle said Diack “asked me to consider… the critical financial situation” of the IAAF.

“With the list… it was going to cause a scandal which could have influenced negotiations with sponsors and put them in jeopardy,” Dolle told the court.

Dolle said he was “trying not to provoke a scandal” and the man who considered himself to be a “hardliner” insisted he had never avoided handing down punishments for doping offenders.

When the judge in the trial, Marie-Rose Hunault, pointed out that some of the names on the list who were allowed to continue competing not only went on to take part in the 2012 London Olympics, but won medals, Dolle said he had been “betrayed”.

“I was slightly a hostage to a commitment I had given my president,” Dolle said, referring to Diack.

Asked about the payments he is accused of receiving, Dolle said he believed 50,000 euros he was given in an envelope by Diack’s son Papa Massata Diack, a marketing consultant for the IAAF, was a “bonus” for his handling of the Russian doping cases.

He said the 90,000 euros that Lamine Diack gave him in two payments in 2013 and 2014 was compensation for being “sacked in a brutal and ungrateful way”.

Diack will give evidence when the trial resumes on Wednesday.

The 87-year-old is charged with “giving and receiving bribes”, “breach of trust” and “organised money laundering”.

The trial, following a four-year French investigation, was originally scheduled to start on January 13 but was delayed to examine new evidence.

The charges against Lamine Diack carry a maximum sentence of 10 years’ prison.

Also appearing in court is Habib Cisse, Diack’s former legal advisor, who is suspected of having acted as an intermediary between the IAAF and Russian athletics authorities and having received hundreds of thousands of dollars.

Missing from the trial, however, will be Papa Massata Diack, who handled lucrative contracts for the IAAF.

Diack senior’s son was implicated through a payment of 450,000 euros from Russian runner Liliya Shobukhova, allegedly to have her blood passport case delayed in order to compete in the 2012 Olympic marathon, as revealed by German broadcaster ARD in 2014.

Diack junior is accused of playing a “central role” in the network of corruption and is charged with “money laundering”, “giving bribes” and “aiding the receiving of bribes”.

Despite two international arrest warrants issued by France, the Senegalese authorities have refused to extradite him.