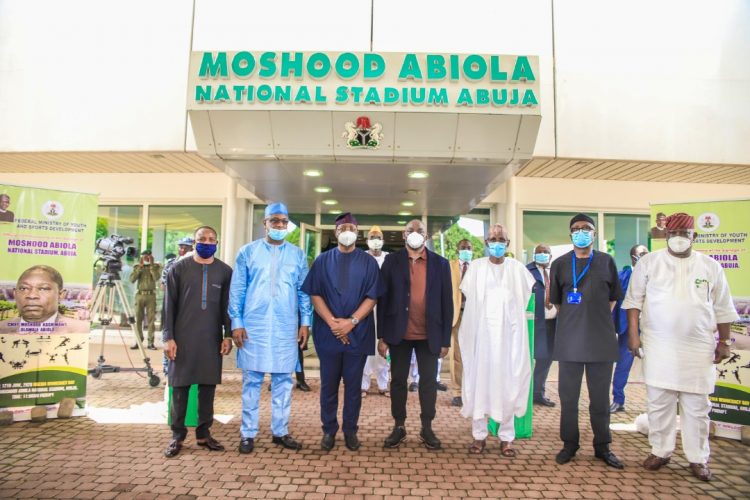 Guests after the formal unveiling of Moshood Abiola Stadium in Abuja

The ceremony was witnessed by Abiola’s first son, Kola and several other ministers.

They are the Sports minister, Sunday Dare, Minister of Industries, Otunba Niyi Adebayo and Minister of State for Labour, Festus Keyamo.

The formal renaming of the stadium coincided with the 27th anniversary of the election that Abiola famously won, but which was annulled by the military junta led by Ibrahim Babangida.

Dare appreciated President Buhari for demonstrating courage in recognising June 12 as a public holiday and also honouring the winner of the election described as watershed in Nigeria’s political history.

Buhari in 2018, also bestowed the nation’s highest honour, Grand Commander of the Federal Republic on Abiola.

“President Buhari chose to walk the path where others failed to walk,”, Dare remarked.

“He chose the path less travelled. Only a committed and patriotic leader can do that.

“We thank President Buhari for adding a significant chapter to the democratic culture of Nigeria.

“Sportsmen, sportswomen and sports lovers thank Mr. President for honouring someone who remains unrivalled as the greatest sports lover, investor and philanthropist.

“Abiola was a consummate sports lover. He invested his time and resources in sports development particularly football. Not many sports administrators will forget Abiola In a hurry”, Dare said.

Dare used the occasion to appreciate other Nigerians who have been supporting sports like MKO Abiola.

“Under this dispensation we have seen Alhaji Aliko Dangote and Chief Adebutu Kessington step up to the plate to support the government of President Muhammadu Buhari in the quest to restore our sporting infrastructure such as this.

“We thank them and several others supporting in their own little ways”, Dare said.