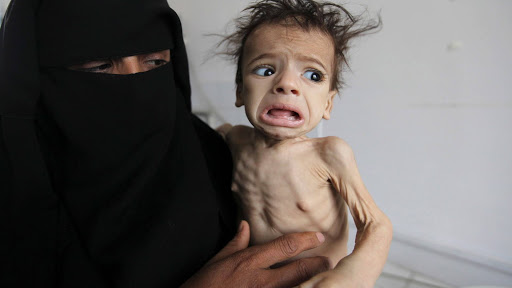 8.4 million Yemenis might starve to death before year 2020 runs out

UNICEF warned on Friday that millions of children in the war-torn country could starve before the year runs out.

It warned that unless 54.5 million dollars is received for health and nutrition services by the end of August, some 23,500 children with severe acute malnutrition will be at an increased risk of dying.

“We cannot overstate the scale of this emergency as children – in what is already the world’s worst humanitarian crisis – the battle for survival as Covid-19 takes hold,” Sara Beysolow Nyanti, UNICEF representative to Yemen, said.

“If we do not receive urgent funding, children will be pushed to the brink of starvation and many will die,” she added.

Since late 2014, Yemen has been embroiled in a devastating conflict between the Saudi-backed government and the Houthi rebels.

The ongoing conflict has undermined the country’s health system and other essential services.

Poor access to water and sanitation is stoking the spread of Covid-19 in the impoverished Arab country.

Around 9.58 million children do not have sufficient access to safe water, sanitation or hygiene, UNICEF said.