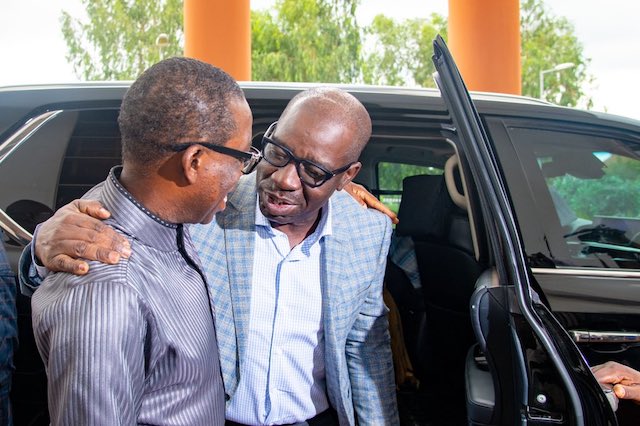 Gov. Ifeanyi Okowa of Delta has congratulated his Edo State counterpart, Godwin Obaseki, on his 63rd birth anniversary on July 1.

The governor’s congratulatory message is contained in a statement issued by his Press Secretary, Mr Olisa Ifeajika, and made available to newsmen on Tuesday in Warri.

He commended Obaseki’s ingenuity and untiring spirit in stimulating the industrialisation of Edo and making life easier for the people through investments, including the Azura-Edo Independent Power Project (IPP), a 450MW Open Cycle Gas Turbine power station.

Okowa also eulogised the Edo governor for his patriotic and unrelenting service to his state and the nation, and prayed to God to grant him long life, good health and wisdom in the service of Edo people and Nigeria.

“It is heart-warming to note that you have, through dint of hard work, discipline and vision to industrialise Edo, won the admiration and respect of your people and the nation at large.

“Your focus and commitment to reforms in governance and your ability to attract investors into your state are remarkable and worthy of commendation.

“No doubt, the people of Edo will, in September, reciprocate your giant strides in the last four years by returning you and your deputy for another term in office to guarantee a brighter future ahead of them.

“On behalf of my family, the government and people of Delta, I heartily rejoice with my brother governor, a reputable politician, outstanding professional, seasoned administrator, Mr Godwin Obaseki, on his 63rd birth anniversary.

“It is our prayer that God will continue to protect you and grant you good health to render more services to mankind,” Okowa prayed.