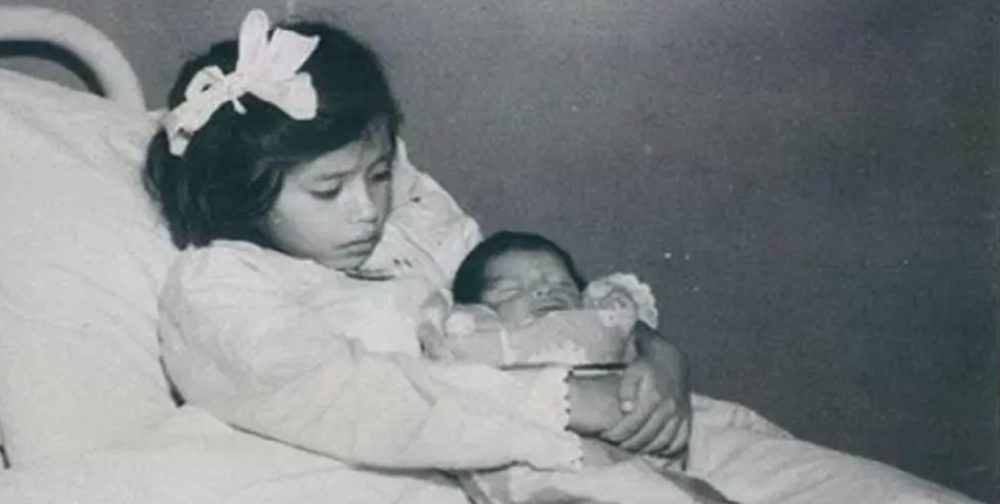 5 year-old Lina Medina with her baby

Lina Marcela Medina is confirmed to be the youngest mother in history, giving birth at the young age of 5 years and 7 months old.

At the age of 5 and 6 months, her parents noticed an abnormal abdominal swelling which at first sight they thought it could have been some sort of tumor but would have never guessed that upon diagnosis from Dr. Gerardo Lozada, Lina was actually 7 months pregnant. At first, the parents didn’t even imagine that it is possible to be pregnant at that age and took Dr. Gerardo for a fool. Therefore they have taken Lina to a specialist which actually confirmed the original diagnosis.

Upon hearing this news, the doctor called the police which immediately arrested Lina’s father as the first suspect. After a week of interrogation, the police had to let Tiburelo go as they didn’t have enough evidence to prove that the father had impregnated his own child.

The second suspect was Lina’s cousin who apparently had mental difficulties which made the authorities think he would be capable of such a horrific act, but once again with no evidence, the police were not able to prosecute him as the father of Lina’s child.

The authorities tried to get some answers from Lina in the presence of her mother to see if she remembered anyone harming her or raping her. With the child extremely confused about everything that was happening to her, the police once again had no lead to a potential suspect or suspects. With no further evidence, nor leads, the authorities dropped the case.

In an article about the case from 1955, the author Luis Leon states that many of the remote villages from Peru held regular “religious festivals” that lead to group sex or even rape which did include minors or children of such young ages as Lina. In the absence of a more plausible theory on Lina’s case, it is believed that she was in fact raped at one of these strange and sick festivals.

Due to her young age and undeveloped body for a pregnancy, the only way for her to give birth to the baby was via a cesarean section, this implied many risks that could have put Lina’s life at risk.

When Lina was 8 months pregnant and her parents were pressured by the media, her mother did confess that Lina started her menstruations at the age of 3. It was later found out by specialists that she suffered from a condition known as precocious puberty, meaning that her sexual organs would developed at a very young age, Glands that secrete growth and sex hormones begin to function abnormally early in life

The Doctors at the maternity knew that there was a high chance for the baby to have major difficulties as Lina’s young organism was thought at the time to be undeveloped, therefore not able to offer the baby the nutrition required when developing during the 9 months of pregnancy. With a miracle, the baby was born healthy at a perfect weight of 2.7 kilograms and coincidentally on mother’s day 14th of May, 1939.

The child was named Gerardo Medina, a name inspired by Lina’s doctor who helped her through labour . The father’s identity still remains a mystery even to this day. What is sure is that Lina was another innocent young victim of sexual abuse. What is more horrifying is that this is still happening to this day.

Lina’s parents tried to offer her child and their grandchild a normal childhood by explaining to them as they grew up the relation between the two. It’s admirable that Lina’s parents protected her privacy and did not use Lina’s unique condition for financial gain.

Many researchers and doctors took a big interest in Lina’s case and therefore wanted to study her as well as her child. Lina’s parents once again refused as they wanted to offer Lina a normal childhood.

Lina is still alive and well today, at the proud age of 87. Not much is known about Gerardo Medina, nor throughout the last decades as the public had respected the privacy of the Medina family.

*This story was first published in Medium