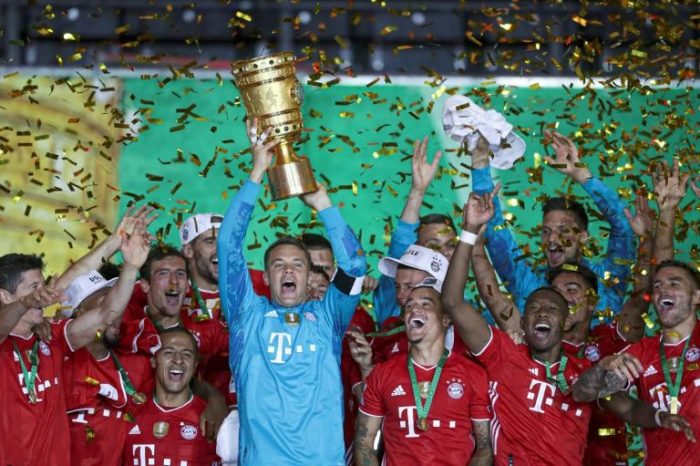 Bayern Munich on Saturday won a “special” league and Cup double for the 13th time in their history.

Their captain Manuel Neuer said they are “hungry” to win the Champions League, to make it a season of treble.

Bayern, who had already sealed an eighth straight Bundesliga title, saw off Bayer Leverkusen 4-2 in the German Cup final.

They had won 11 successive games since the season resumed in mid-May after a two-month hiatus due to the coronavirus.

The Bavarian giants are one of the favourites for the Champions League, to be completed in Lisbon next month, which would secure a repeat of the treble they won in 2013.

“We’ll have a short break now and then we’ll make sure we are in top form and try to win the treble,” said Bayern captain Neuer.

“We have all seen in the last few weeks how motivated and hungry Bayern Munich are. What we have achieved is something special.”

Robert Lewandowski reached 51 goals for the season thanks to a double in the final, with David Alaba and Serge Gnabry also on the scoresheet.

Head coach Hansi Flick was hoisted into the air by his players following the final whistle.

“We’re very proud of what we have achieved,” said Flick. “What the team has managed in the last few weeks is nothing short of sensational.”

Bayern now have a month before resuming their treble bid with the Champions League last-16 second leg against Chelsea.

“The break could do us good, I’d like to think of it as an advantage and the chance to recharge,” added Flick.

The final, like the final weeks of the Bundesliga season, was played in an eerie atmosphere behind closed doors at Berlin’s Olympic Stadium.

“It’s a bit of a sad moment,” admitted Thomas Mueller after winning the German Cup for the sixth time.

“If the fans are missing at such a Cup final, it’s not the same. We’ve done well this season over long stretches, but it also hurts a bit.”