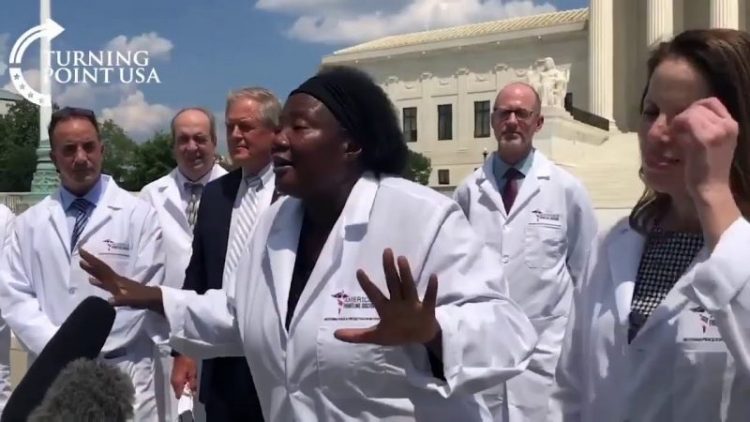 YouTube has blocked Dr Stella Immanuel’s testimony about the efficacy of hydroxychloroquine, as a cure for COVID-19.

This made the doctor threaten to crash the social platform, invoking the power of Jesus.

“Hello Facebook put back my profile page and videos up or your computers with start crashing till you do. You are not bigger that God. I promise you. If my page is not back up face book will be down in Jesus name.”

P.M.News, however found that her controversial video is alive on many Facebook accounts as it has been widely shared, before the clampdown.

Her maiden name is Gwandiku-Ambe. She attended University of Calabar College of Medicine and graduated in 1990.

According to a shared whatsApp profile of hers, she is also the owner of Fire Power Deliverance Ministry.

She did Residency in Pediatrics at Bronx-Lebanon in New York.

She did her internship under Dr. Babatunde Dosu, a Nigerian pediatrician in Dallas.

She has Medical Licenses in Louisiana, Texas (November 2019) and Kentucky.

A Nigerian Abraham Ariyo wondered how she crossed from Pediatrics to Adult Medicine /Emergency to treating a 96-year-old patient.

“Nonetheless, there is a ‘Gofundme’ page for legal troubles in her name, maybe to cash in. Also, reliable sources have confirmed that this campaign is politically motivated and sponsored by Steve Bannon’s BREITBART”, said Ariyo.

“Remember none of them were wearing masks. Also, this campaign tends to look for ‘easy manipulated doctors’ like Trump’s 2016 strange physician.”, he added.

Dr Stella Immanuel was trending on social media on Tuesday after delivering an impassioned COVID-19 speech in Washington D.C.

But her testimony has been dismissed as politically motivated.

Immanuel is said to be working with Trump campaign groups.

And she is reported to be just a primary health care doctor, who probably comes across patients with mild symptoms of COVID-19.

As some experts said, those people do not even need any medicine, as they will come through.

Her video is also being shared by Freedom Rights and retweeted by Conservative Trump campaigners.

Benny Arthur Johnson is one of them.

He is an American political columnist, currently serving as chief creative officer at conservative nonprofit Turning Point USA. So he is a Trump campaigner.

Johnson first rose to prominence as an editor at BuzzFeed, until it was revealed that many of his published articles were plagiarized and he was fired.

“You want a double blinded study where people are dying? It’s unethical.” pic.twitter.com/TYQjn7EKMH

“I went to medical school in West Africa, Nigeria, where I took care of malaria patients, treated them with hydroxychloroquine and stuff like that.

“For the past few months, after taking care of over 350 patients, we’ve not lost one. Not a diabetic, not a somebody with high blood pressure, not somebody who asthma, not an old person.

“We’ve not lost one patient. And on top of that, I’ve put myself, my staff, and many doctors that I know on hydroxychloroquine for prevention because by the very mechanism of action, it works early and as a prophylaxis.

“The study that made me start using hydroxychloroquine was a study that they did under the NIH in 2005 that says it works.

“I know you’re going to tell me that you treated 20 people, 40 people, and it didn’t work. I’m a true testimony. So I came here to Washington DC to tell America nobody needs to get sick.

“This virus has a cure. It is called hydroxychloroquine, zinc, and Zithromax. I know you people want to talk about a mask. Hello? You don’t need a mask. There is a cure.

“I tell all of you doctors that are sitting down and watching Americans die. You’re like the good Nazi … the good one, the good Germans that watched Jews get killed and you did not speak up.

“If they come after me, they threaten me. They’ve threatened to … I mean, I’ve gotten all kinds of threats. Or they’re going to report me to the bots.

“You can report me to the bots, you can kill me, you can do whatever, but I’m not going to let Americans die.