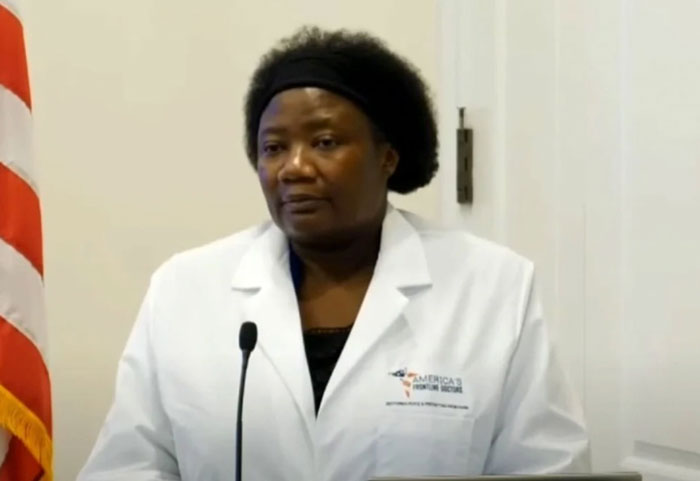 Dr Stella Immanuel: She has lots of controversies trailing her

Stella Immanuel, the Houston Texas  doctor  who has become an internet sensation after claiming hydroxychloroquine  is a cure for COVID-19, has made some other weird claims in the past.

According to  The Daily Beast,  Immanuel has  a history of making bizarre claims about medical topics and other issues.

“She has often claimed that gyneacological problems like cysts and endometriosis are in fact caused by people having sex in their dreams with demons and witches.

“She alleges alien DNA is currently used in medical treatments, and that scientists are cooking up a vaccine to prevent people from being religious.

“And, despite appearing in Washington, D.C. to lobby Congress on Monday, she has said that the government is run in part not by humans but by “reptilians” and other aliens.

On Monday, when in Washington D.C., she startled medical experts when she said face masks aren’t necessary to stop transmission of the highly contagious coronavirus.

This was after she claimed hydroxychloroquine, along with Zinc and Zithromax is the cure for COVID-19.

She become a star on the right-wing internet, garnering tens of millions of views on Facebook on Monday alone.

Immanuel, is a pediatrician and also a religious minister, who runs Fire Power Deliverance Ministry. Undoubtedly her religion appears to have coloured her medical practice.

Immanuel gave her viral speech on the steps of the Supreme Court at the “White Coat Summit,” a gathering of a handful of doctors who call themselves America’s Frontline Doctors and dispute the medical consensus on the novel coronavirus.

The event was organized by the right-wing group Tea Party Patriots, which is backed by wealthy Republican donors.

In her speech, Immanuel alleges that she has successfully treated hundreds of patients with hydroxychloroquine, a controversial treatment Trump has promoted and says he has taken himself.

Studies have failed to find proof that the drug has any benefit in treating COVID-19, and the Food and Drug Administration in June revoked its emergency authorisation to use it to treat the deadly virus, saying it hadn’t demonstrated any effect on patients’ mortality prospects.

“Nobody needs to get sick,” Immanuel said. “This virus has a cure.”

Immanuel said in her speech that the supposed potency of hydroxychloroquine as a treatment means that protective face masks aren’t necessary, claiming that she and her staff had avoided contracting COVID-19 despite wearing medical masks instead of the more secure N95 masks.

“Hello, you don’t need a mask. There is a cure,” Immanuel said.

But both Facebook and Twitter eventually deleted videos of Immanuel’s speech from their sites, citing rules against COVID-19 disinformation. The deletions set off yet another round of complaints by conservatives of bias at the social-media platforms.

Immanuel responded in her own way, declaring that Jesus Christ would destroy Facebook’s servers if her videos weren’t restored to the platform.

Culled from The Daily Beast