Change of command at TRADOC as Irabor takes over from Tafa 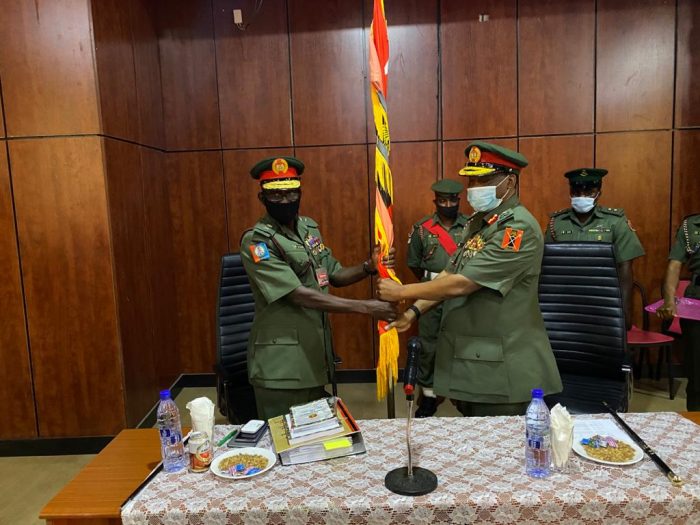 Maj-Gen. Lucky Irabor, the new Commandant, Training and Doctrine Command of the Nigerian Army (TRADOC), Minna has challenged personnel of the command to intensify research to enhance performance.

Irabor made the appeal when he assumed duty at the command’s headquarters on Tuesday in Minna.

The new commandant, who took over from Maj-Gen. Abubakar Tarfa, who has been posted to Nigeria Army Resource Centre, Abuja, charged the officers and men to double efforts toward effective documentation.

“I expect the best from the officers and men of this great institution to advance the course of TRADOC and build on the achievements of the former commandant,” Maj- Gen. Abubakar Tarfa he said.

Irabor congratulated his predecessor for the success recorded in areas of research that had improved the execution of the statutory mandate of the Nigerian Army.

In his response, Terfa outlined the achievements of TRADOC under his leadership to include production of doctrines and other documents for the Army.

“We have succeeded in conducting examinations for senior army officers without leakage of vital documents,” he said.

Tarfa urged the new commander to sustain the tempo for optimal growth, and commended officers and men of the command for their zeal, commitment and loyalty.

“I urge you to support the new Commandant to raise this great institution to greater heights,” Tarfa said.