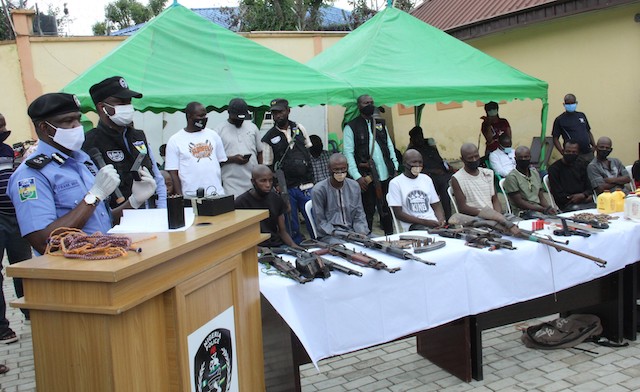 Detectives attached to the Intelligence Response Team (IRT) of the Nigerian Police have arrested a 9-man gang of carjackers, operating between Nigeria and Niger.

The gang was said to be responsible for snatching over 30 exotic cars at gun point.

It was also blamed for the death of two policemen.

At the head of the syndicate is one Yakubu Hayatu, a 30 year-old from Borno State.

Others are Abubakar Samaila, Muhammadu Abdulahi, both 20 year-old from Zaria, Yahaya Mohammed, 18, from Kaduna State, Ibrahim Abubakar, 21, from Kwara.

Eighteen vehicles have so far been recovered by the Police team from the gang.

The police team is working with the INTERPOL to apprehend the receiver Alhaji Garba and to recover the remaining vehicles, a police statement by spokesman Frank Mba said.

Members of the car-jacking gang were among the 35 paraded by the Police headquarters in Abuja on Wednesday for their active involvement and participation in series of kidnapping, armed robbery and other heinous crimes across the country.

Among the suspects was a Pastor Adetokunbo Adenopo, based in Sagamu Ogun state, who was accused of kidnapping a delivery man.

Also arrested was the kidnapping gang said to be responsible for the killing a Nigerian-born U.S. Soldier Chuks Okebata.