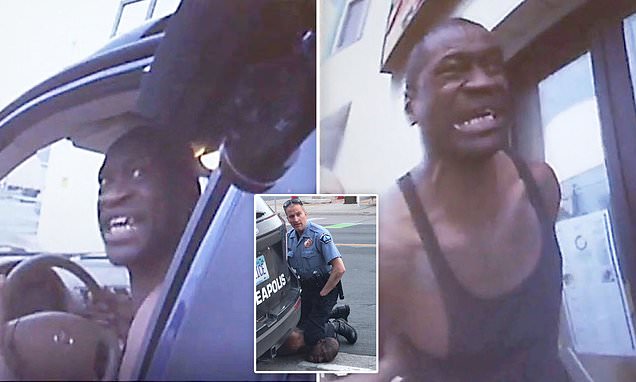 Footage of Police body cameras showed a frightened George Floyd begging police not to lock him in a squad car, shortly before he lost consciousness under a police officer’s knee.

The leaked material was first posted by the Daily Mail on its site Monday, and matches some of what was shown to NBC News at the courthouse during pre-trial hearings for the four Minneapolis police officers who have been criminally charged in connection to Floyd’s death.

Police were called to a convenience store on May 25 investigating a possible counterfeit $20 bill. Floyd was parked a short distance away and an officer almost immediately pulled his weapon on the startled man, video showed.

According to police camera footage, Floyd appeared terrified and emotionally distraught, after seeing police officers with a gun pointed at him.

Officers pulled Floyd out of his car and handcuffed him over the $20 bill, before marching him to a nearby police vehicle where he pleaded not to be put inside.

Floyd eventually sat down on the back seat, without his legs completely inside.

Officers then struggled to pull Floyd inside, the bodycam video showed.

Floyd would eventually end up face down on the pavement, with officer Derek Chauvin’s knee on his neck for about 8 minutes, bystander video showed.

Floyd pleaded “I can’t breathe” while under Chauvin’s knee and called out for his late mother, prosecutors have said.

I just saw the full bodycam video of George Floyd’s arrest. ALL the cops, not just Derek Chauvin, are guilty of murder. Floyd posed no threat to them at any time yet they drew their guns, dragged him around, and even threatened innocent bystanders for the crime of being black.

New footage shows him resisting for multiple minutes prior. He was high on fentanyl. He said “I can’t breathe” prior to police touching him.

The media was successful. They played into our emotions and we took their words as Gospel.

How many fucking white people do drugs? How many get killed for it? Fuck off with your bullshit excuses. George Floyd didn’t deserve to die. #BLM yesterday, today, and tomorrow. Fuck Chauvin I hope he rots

Watching George Floyd act like an insane druggie who can’t breathe as soon as the officer seats him in the car certainly adds another dimension to the lies we have been sold about police brutality, doesn’t it pic.twitter.com/sTfWDDivxc

You rioted and burned down your cities over nothing.

Footage of George Floyd just prior to his death has been released. He's scared, crying, and pleading for officers not to shoot him.

How was George Floyd suddenly claustrophobic when he had no trouble driving a car with passengers in it, or at any point during his 17 previous arrests?

We weren’t told the truth about George Floyd.

Watched the bodycam footage of George Floyd being murdered by Derek Chauvin.

Nothing changes.
He still murdered him.
Chauvin belongs in prison.
Callous disregard for human life.

George Floyd told cops his mom just died. She’d been dead for two years. He said he’s too claustrophobic to get in the police car. He was just sitting in a car. He said he couldn’t breathe and was going to die while he was still standing.