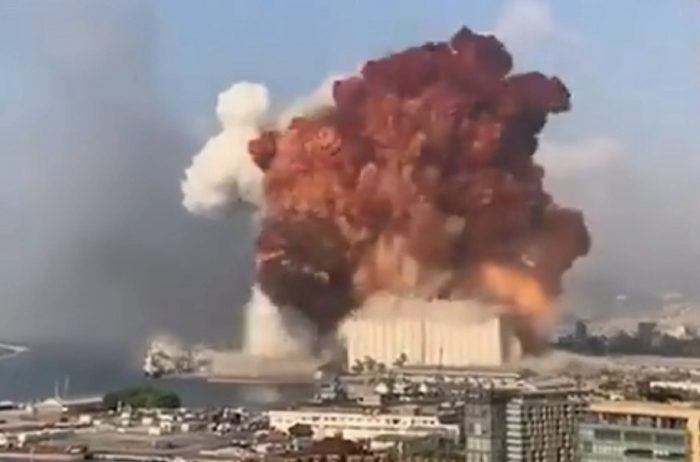 Reports said a welder mistakenly ignited 2,700 tons of explosive chemicals in the Beirut port area on Tuesday, leading to the ghastly blasts, deaths and destruction.

The explosive chemicals made of ammonium nitrate had been stored in a warehouse without safety measures since 2014.

And it triggered two deadly blasts said to be a fifth of the atomic bombs that America used to destroy Hiroshima and Nagasaki in Japan during the Second World War.

Over 100 people have died and several thousands injured, with the blasts leaving a trail of destruction of buildings nearby.

Nearby structures were flattened, windows and doors were blown out, cars were thrown and crushed, and fires burned as the sun set over Beirut.

Many people are feared to still be trapped under the rubble and inside their damaged homes.

Toxic gases were also reported in the aftermath along with strange orange clouds, with the US Embassy warning any Americans in Beirut to stay inside.

Ammonium nitrate is mainly used as a fertiliser, but has also been linked to terror attacks after being used in homemade bombs.

Lebanese President Michel Aoun has declared a state of emergency for Beirut for two weeks – and vowed the “harshest punishments” for those responsible.

Beirut mayor Marwan Abboud broke down in tears on live TV as he compared the blast to those at Hiroshima and Nagasaki, where the first ever nuclear bombs were dropped, killing thousands.

He said: “I’ve never seen such a big destruction. This is a national calamity, this is a disaster for Lebanon.”—The Sun