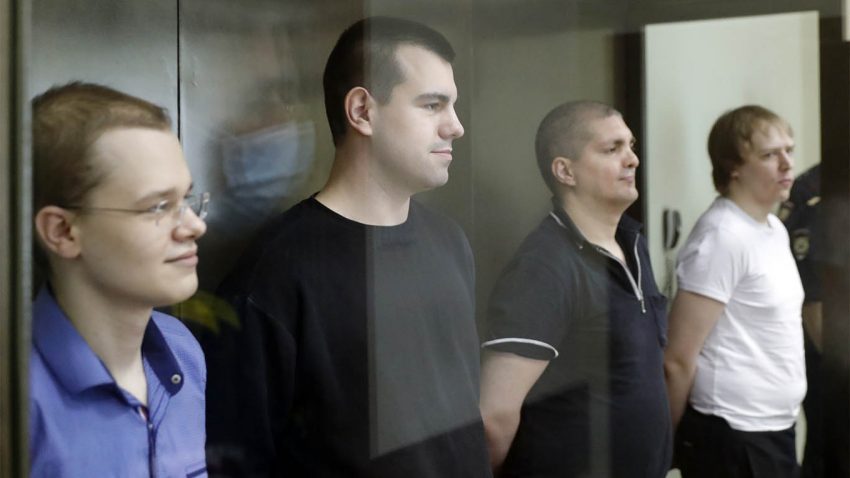 Three young activists have been sentenced to long jail terms for plotting to overthrow President Vladimir Putin in a case that has sparked protests and allegations of police overreach.

The young activists identified as Ruslan Kostylenkov, Pyotr Karamzin, and Vyacheslav Kryukov were sentenced by a Moscow court on Thursday.

The activists were arrested and detained since 2018 after they were accused of belonging to an anarchist cell called the “New Greatness” that was plotting an uprising against the government.

However, the group’s supporters said the case was fabricated by the FSB security service and that agents infiltrated the group, financed operations, and coerced its members into renting office space and creating a charter.

However, a judge in a Moscow court sentenced 27-year-old Ruslan Kostylenkov to seven years in a penal colony, 34-year-old Pyotr Karamzin to 6.5 years and 22-year-old Vyacheslav Kryukov to six years for creating an extremist group.

All three had been in pre-trial detention since March 2018.

Four others who were also accused received suspended sentences of 4 to 6.5 years on the same charge, according to an AFP journalist in the courtroom.

Police arrested at least three people outside the court protesting against the trial. One protestor dressed a police uniform cut the throat of a mannequin before being wrestled to the ground by police.

The ruling comes as critics of Putin cry foul over an increasing number of high-profile terror and treason cases deemed to be politically motivated by activists and human rights monitors.

In February, seven young anarchists and anti-fascists were sentenced to between six and 18 years in prison on terror and other charges after saying they were tortured in custody.