London Marathon scaled down to elite only race 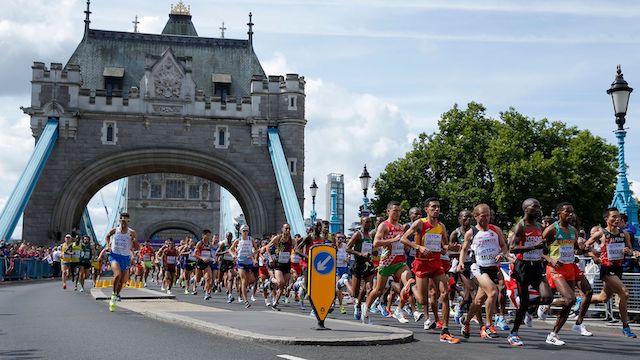 London Marathon scaled down to elite only race

The mass participation London Marathon has been scaled down to an elite-only race, on a multi-lap, fan-free circuit, because of COVID-19.

The race which will feature Eliud Kipchoge and Kenenisa Bekele, will be held on Oct. 4, organisers said on Thursday.

The race, which normally attracts almost 40,000 runners and raises millions of pounds for charity, was originally postponed from April.

But the ongoing complications caused by the pandemic, not least the potential infection risk caused by hundreds of thousands of fans lining the route through central London, meant that hosting remains impracticable.

The Boston, Berlin, New York and Chicago marathons have all been cancelled while the Tokyo Marathon was run as an elite-only event in March.

London’s elite-only race will be held without spectators on a 19.8 lap course in a “controlled secure biosphere” around St James’s Park. The finish line will be in its traditional place on The Mall.

Full details of the field and prize money will be released at a later date but the race will be headlined by the only two men to have gone under two hours, two minutes for the distance.

Defending champion Kipchoge of Kenya, who became the first man to run a sub-two hour marathon in an unofficial race in Vienna last October, is seeking a record fifth London title.

He holds the official world record of two hours, one minute, 39 seconds – two seconds faster than Ethiopia’s Bekele, who has three Olympic and five world championship golds over 10,000 and 5,000 metres, distances over which he still holds the world record.

Marathon world record holder Brigid Kosgei of Kenya heads the women’s field and times recorded on what is described as a very fast course will be eligible for Olympic qualification for the postponed Tokyo 2021 Games.

Race director Hugh Brasher said he had held back confirming the cancellation as there had been hope that the event could still be held utilising new Bluetooth technology to monitor participants’ social distancing and facilitate post-race track and trace.

However, ultimately the “multiple issues of managing spectators, emergency services access and the increased likelihood of a second spike that has led to the recent cancellation of spectator trials at major events and the ongoing concern about the pressure even a reduced size mass participation marathon might put on the NHS” settled the issue.

Brasher said there would be a “virtual” marathon held on race day, where registered runners could wear their race numbers, record their own 26.2 mile runs and receive a finisher’s medal and T-shirt.

“We believe that Sunday 4 October will be a London Marathon like no other,” Brasher told a conference call.

“We think the 40th race will take the spirit of the world’s greatest marathon to every corner of the globe, with runners raising vital funds for the charities that have been so severely affected by the economic effects of the pandemic.”