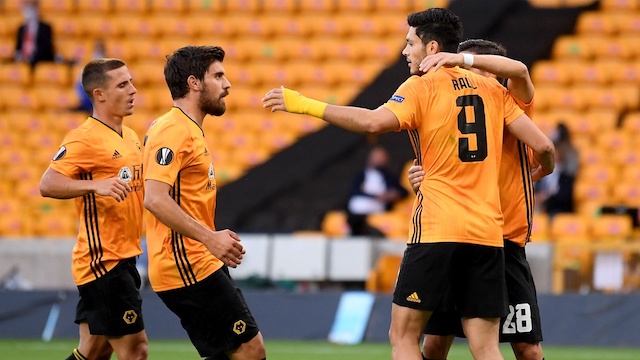 Raul Jimenez of Wolves, right, with team mates on Thursday after beating Olympiacos

Raul Jimenez’s 27th goal of the season earned Wolves a 1-0 victory. The first leg had ended 1-1.

The reward for Nuno Espirito Santo’s team is Sevilla, who beat Roma 2-0, for a 2-0 aggregate win.

Wolves and Sevilla will meet in Germany next week.

Bayer Leverkussen and Basel also qualified for the last eight.

Olympiacos had knocked Arsenal out of the competition on their previous visit to England, but another Premier League scalp proved beyond them, thanks to Jimenez’s early penalty.

Mady Camara thought he had levelled in the first half but a goal that would have forced extra time was ruled out by VAR as Youssef El-Arabi was adjudged offside in the build-up.

Wolves led just eight minutes in when goalkeeper Bobby Allain barged Daniel Podence to the floor, with Jimenez converting the spot-kick for his 37th goal involvement of the campaign – the joint-most with Kevin De Bruyne this term among Premier League players.

Olympiacos thought they had levelled in the 28th minute through Camara’s effort, which deflected in off Willy Boly, but, after a lengthy delay, El-Arabi was found to have just strayed offside prior to delivering the cross.

An audacious 25-yard rabona attempt from Jimenez then went over the top, while Podence was denied by Allain in the second half.

Substitute Diogo Jota wasted a golden chance to wrap up the tie when he squandered a one-on-one chance and Wolves were indebted to Rui Patricio’s brilliant point-blank save from Ahmed Hassan with nine minutes to go.

*With Liam Blackburn, who writes for Livescore.com