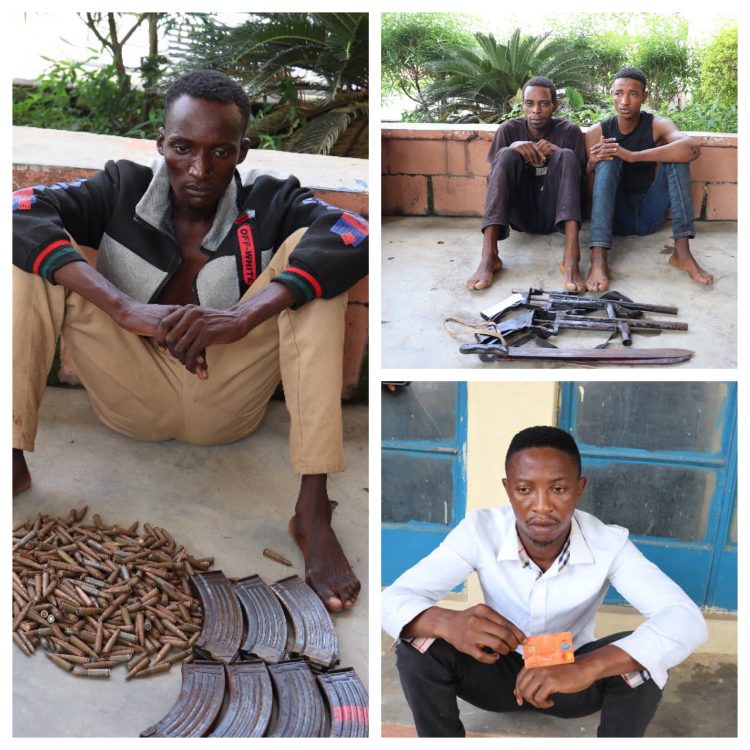 Some of the suspects arrested by the police in Niger state

The Niger State Police command has arrested four suspects for alleged robbery, kidnapping and fraud in different parts of the state.

” On August 10, at about 0200 hours, acting on information, SARS Operatives attached to Suleja Police division , arrested one Abubakar Adamu, 35, of Kuspa area in Suleja inside a red Honda Civic Car with Reg. NO. AY 280 KTN, with 375 rounds of AK-47 live ammunitions and 7 AK-47 magazines.

” During interrogation, suspect confessed to be member of armed robbery and kidnapping syndicate, who specializes in transporting arms and ammunitions for the syndicate.

Abiodun, said the case is under investigation.

He added that police operatives have stepped up efforts to arrest other members of the gang.

Abiodun also said that on 2 August, at about 11:00 hours, an information was received that about six gunmen invaded Kuchi village, in Munya LGA and kidnapped a woman.

On receipt of the information, Police Operatives attached to Sarkin-Pawa division swung into action and arrested two of the suspects at Mararaba Dandaudu and Injita villages in Munya LGA’s .

During interrogation, the suspects confessed to be members of a six man gang and that the victim was handed over to them to be taken to Babur Kabula forest in Munya LGA.

Similarly, on August 8, at about 15:00 hours, based on a tip-off, Police Operatives attached to SARS Minna arrested one Onuwa Stephen of Benin, Edo State.

“The suspect was arrested at Obasanjo Shopping Complex Minna while he was about to buy a large number of Phones with another person’s ATM card.

During interrogation, the suspect confessed to have loitered around the premises of a Commercial Bank in Minna where he spied some customers at the ATM gallery and was able to retrieve a customer’s ATM card from the machine and accessed the account.

Suspect will be charged to court as soon as investigation is concluded, Abiodun said.