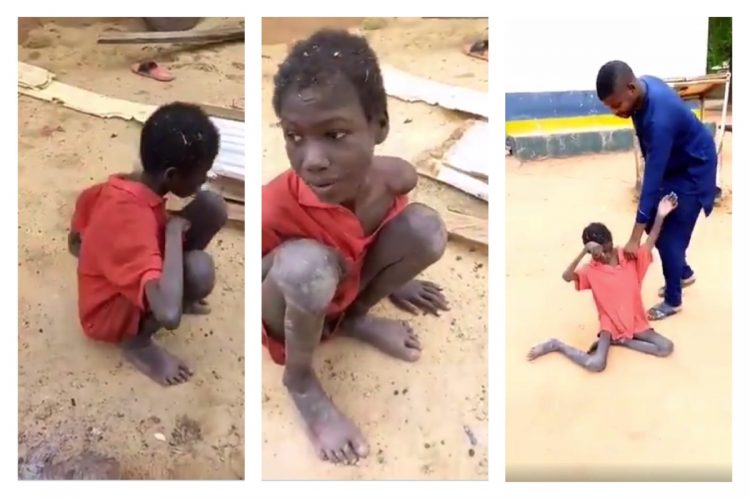 Jibril Aliyu treated like an animal for two years

A horrendous case of child abuse has just been uncovered in Kebbi state, in northwest Nigeria: of a 10 year-old boy tethered in a pen with domestic animals for two years and who survived eating the food remnants left by the animals.

The abuse has been ranked as arguably the worst in Nigeria, a possible horror candidate in the Guinness Book of Records.

The boy’s story was shared on Twitter Monday night by Manir Jega, with video clips and photos that will rend the heart.

It was the story of how a supposed father and two wives gave the mother of all bestial treatment to a young boy, who lost his mother in the polygamous home.

The boy was eight years-old when he was thrown into the animal pen by his father. When he was found two years after, he had only a skeletal frame, drained of all the attributes of kids his age.

Jega wrote: “This is a story of a boy called Jibril Aliyu, who hails from Badariya Area of Birnin Kebbi, Kebbi State. He was chained alongside animals by his 2 stepmother for 2 years.

“His mother died 2 years ago. He was denied shelter, clothing, food, not to talk of health care.

“He was maltreated by these same people like an animal to the extent that he was feeding on the remnant food of the animals he was tied with and even ate his faeces, until he was rescued by some Human Right Activist.

“As a result of monstrous and nefarious treatment he was subjected to, he entirely lost his senses and behaves exactly like an animal.

“What is most surprising is the fact that his father was living in the same house with them while he undergoes this inhumane and savagely cruel treatment.

“His 2 evil step mothers, together with his father are currently in police custody. While the 10 year old Jibril is undergoing treatment and rehabilitation at the Federal Medical Center Birnin Kebbi. What happened to Jibril is the highest level of barbarity and extreme cruelty.

“I therefore call on the Kebbi State Government to ensure that the culprits face the full wrath of the law. I also call on the good people of Kebbi State and beyond to riseup en mass until justice prevails for Jibril

“I pray that the villainous culprits will pay dearly for their atrocity!”