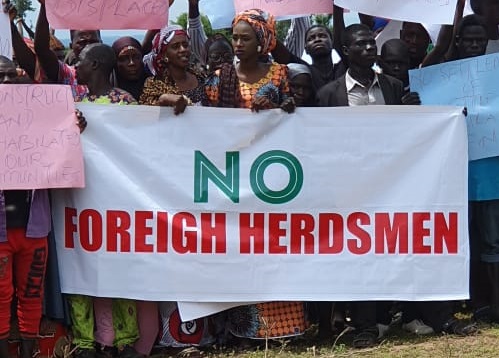 File photo: Protest against foreign herdsmen like those in Okunland of Kogi

Armed Fulani herdsmen from Mali and Niger have swamped some communities in Kogi West Senatorial District, an environmentalist and community leader, Dr. Oluwayomi David Atte has cried out.

Atte, a former Commissioner for Education in the old Kwara State and former Governorship aspirant in Kogi State said bands of herdsmen have positioned themselves in various communities in Okun land , raising concerns about insecurity.

He told P.M.NEWS that some of the armed herdsmen were accosted by hunters in MopAmuro Local Government Area.

He said the Invaders brandished a letter claiming they have government backing to farm in the area. He said the light skinned Fulani further told the hunters that they were from Mali.

The elder-statesman said he, along with other leaders in the Okun Development Association, ODA has taken steps to report the unhealthy development to members of the Kogi State Executive Council and some legislators but that “no clear actions have so far been taken on the matter.”

He noted that between Akutupa community and Egboro in Kabba-Bunu LGA, there is an active Fulani camp of close to 5,000 herdsmen.

He said the alarm has become necessary in view of media reports that Miyetti Allah Cattle Breeders Association of Nigeria, MACBAN, is putting finishing touches to the establishment of a Vigilante group across the country.

“There is a four month old Fulani camp just a few kilometers from my village. They claimed to be from Niger Republic and that they got official letter to come there from one Sarkin Buari. They said they were going to Igbolekun and requested for safe passage.

“Only God knows where they are today because they disappeared into the forest at that time.

“Recently a woman in my village narrated how she woke up at dawn and met an armed Fulani leaning on a tree in her compound. Of course she quickly ran back inside the house. The threat to peace is real in Okunland

“How come that the President ordered that arms in civilian hands be confiscated throughout Nigeria while Fulani are roaming around openly, including within the metropolis of Abuja, holding AK-47 rifles unmolested.”

“In our area we have concrete facts that Fulani killed a farmer. Nothing was done in spite of reports to Government agencies.

“Weeks later the villagers beat back a Fulani attack and one of them was killed. The Police and other security agencies descended on that village thereafter, arrested and incarcerated the villagers.”

Atte called for concerted efforts from all stakeholders to end the herdsmen menace.