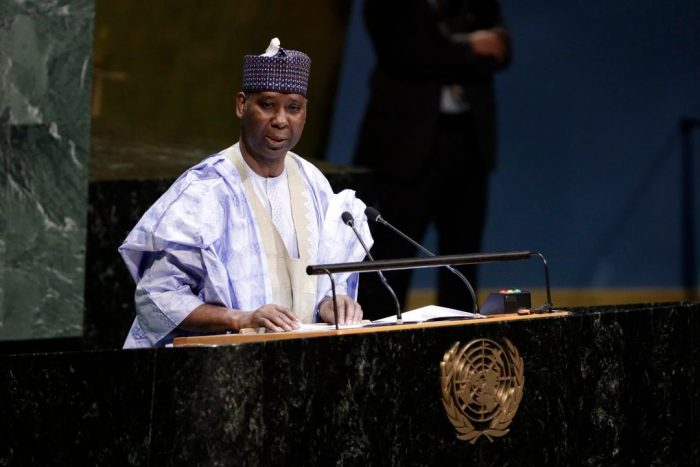 President of the UN General Assembly, Amb. Tijani Muhammad-Bande has urged the international community to stand by the people of Lebanon following the Aug. 4 deadly explosions in Beirut.

Muhammad-Bande made the call during a virtual briefing by high-level UN officials on the humanitarian situation in Lebanon, on Monday.

According to the World Health Organisation, no fewer than 150 people have died following the massive explosions, which resulted from ammonium nitrate stored in a warehouse at the city’s port.

The organisation said no fewer than 6,000 others were injured and over 300,000 people rendered homeless by the incident.

“The images streaming in from Beirut shook our hearts.

“The devastating impact of last week’s tragedy makes it imperative for the international community to stand beside the people of Lebanon who have generously hosted thousands of refugees for years.

“We must respond by providing the necessary humanitarian assistance to alleviate the immediate suffering and to support the Lebanese people as they embark on the road to recovery.

“The needs are enormous and great,’’ said the UNGA president, who is Nigeria’s Permanent Representative to the UN.

He noted that the tragedy had worsened the suffering of the Lebanese people already facing “multiple challenges in recent times, including economic hardship and the COVID-19 pandemic’’.

“We must mobilise all assistance we can to enable the country to wade through these difficult times and come out of the current crisis much stronger,’’ he added.

The Nigerian envoy expressed appreciation to the French government for hosting a virtual summit on Sunday to raise funds in support of the Lebanese people.

International donors pledged 297 million dollars (N112.8 billion) at the event, according to the BBC.

Muhammad-Bande also thanked other countries that have already responded with financial and medical assistance to Lebanon, urging others to “follow suit by funding the ongoing humanitarian response’’.

“I welcome the efforts by the World Bank, which in its recent announcement, promised to reprogram existing resources and explore additional financing to support rebuilding lives and livelihoods of people impacted by the crisis.

“This, indeed, is crucial to facilitating recovery efforts, as well as to strengthening the resilience of the people and the country of Lebanon in general,’’ he said.

In his remarks, UN Secretary-General António Guterres said the incident was an “additional test’’ of the “legendary strength of the Lebanese people’’.

Guterres also called for “robust international support for all people in need in Lebanon, especially women and girls who are most vulnerable in times of crisis’’.

While also thanking countries that are already providing “tangible financial, material and specialised assistance”, he urged donors to give “speedily and generously”.

Commenting on the massive protests that greeted the tragedy in Lebanon, the UN Chief maintained that “the anger of the Lebanese people is palpable, and their voices must be heard”.

He called for a credible investigation to determine the exact cause of the explosion and bring about the accountability “demanded by the Lebanese people”.