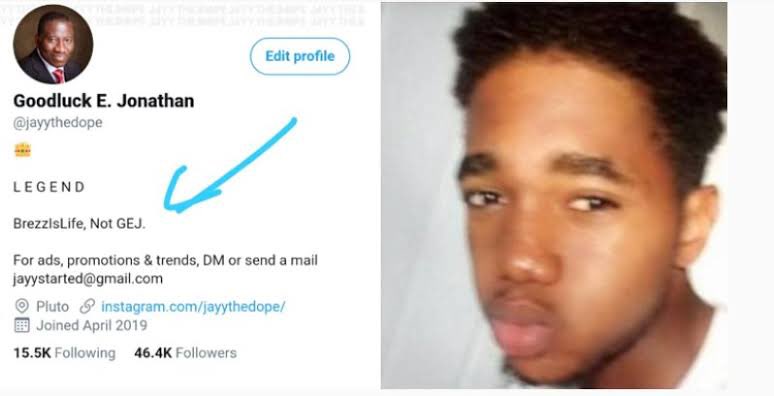 Olusola Babatunde, a student, and social media influencer, who was arrested for creating a parody Twitter account of former President, Goodluck Jonathan has been released after 82 days in detention.

The final year student of Ladoke Akintola University, Ogbomoso was arrested on the orders of Jonathan and was denied access to a lawyer while he stayed in detention at the Force Criminal Investigation Department, Garki, Abuja.

The Convener of #RevolutionNow protest, Omoyele Sowore announced his release via Twitter on Tuesday

#FreeShola has just been released from @PoliceNG detention in Abuja after more than 2 months for creating a parody account in the name of ex-President @GEJonathan, the former Pres. has also agreed to discontinue the bogus criminal trial. G-thanks to all! #RevolutionNow pic.twitter.com/Q73zVf4k97

Speaking to journalists shortly after he was released, Babatunde said several suspects were cramped up in small cells in contravention of the COVID-19 guidelines.

The man, however, said he was never tortured by policemen and was fed twice a day like other suspects.

Babatunde said: “There was no social distancing in detention. I guess the people in the cells are exceptional. It is like COVID-19 doesn’t infect them and this is despite the fact that new suspects are brought in every day without testing.

“However, we had an incident just once. There was a Chinese man who was a gold miner who fell ill. He was taken to a hospital and tested positive for COVID-19, so he was hurriedly released.

“He was in the Force Intelligence Bureau department so only the suspects in that cell were tested. We were all at risk of getting infected with COVID-19.”

“It wasn’t easy. I spent 82 days in detention, and I was transferred to three different cells. I wore the same clothes for 82 days.”

The student also expressed disappointment that the ex-president ordered his arrest despite being one of his biggest supporters.

He added: “The funny thing is that I even tweeted good things about Goodluck Jonathan a few weeks before my arrest. I said Jonathan’s administration was better than that of the current president. So, I was shocked but this is Nigeria.”

When asked if he was still a fan of Jonathan, Babatunde responded laughingly, “May God help us.”

Narrating how he was arrested, the student said his uncle called him that policemen wanted to see him.

The student said on getting to his uncle’s house, the police arrested him and did not reveal to him the reason for his arrest.