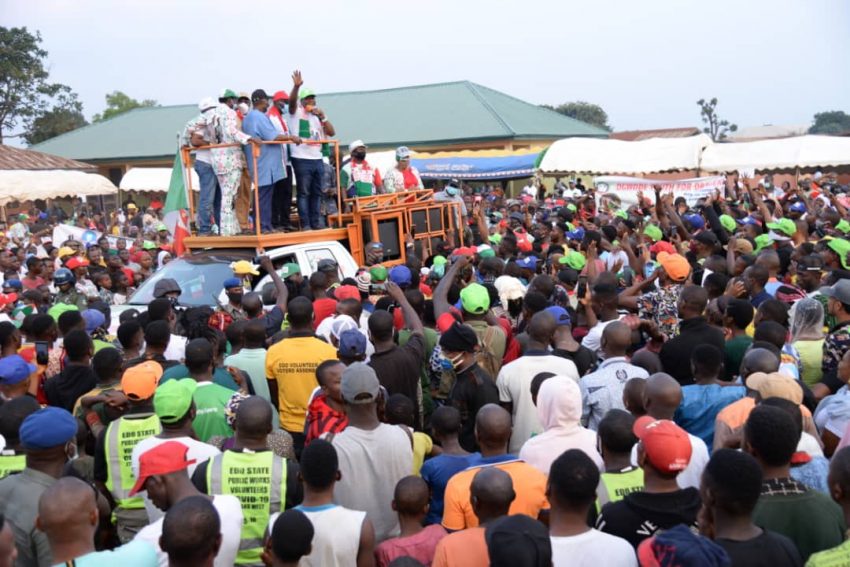 Edo deputy governor Philip Shaibu on Thursday in Jattu, Etsako West Local Government Area, expressed joy over the large turn out of supporters at campaign rallies, and described the development as “thrilling”.

Shaibu is contesting the Sept. 19 governorship election with his boss, Gov Godwin Obaseki, on the platform of the PDP.

The deputy governor, while addressing supporters in his Ward 11, declared: “with the crowd, I see here, this election is won by PDP already”.

“This election is for the liberation of the people. The governor is bringing development closer to the people.

“On the 19th of September, you people should come out and support the governor and me. You people have been with me since when I was in the House of Assembly. Give me the same support and I will not disappoint you,” he said.

In his remarks, Obaseki thanked the people for the trust and promised that they would not be betrayed.

“This election is about the future of the people. As a government, we must continue to pay salaries, pay pension, create employment for our people.

“We won’t allow a few people to distract us from achieving greatness. My message for you is to come out and give us the same vote you gave us the last time,” he said.