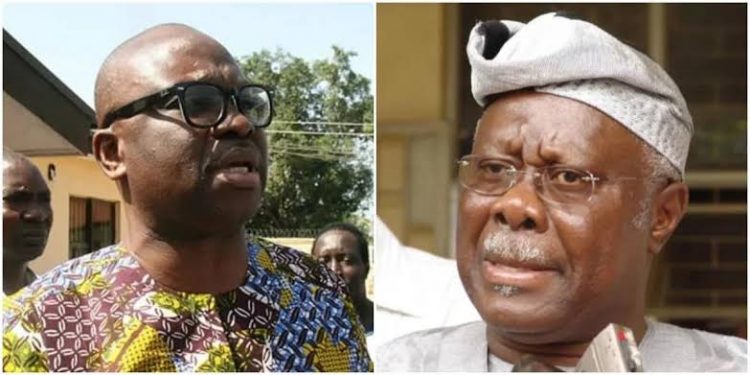 Former Governor of Ekiti State, Ayodele Fayose has attacked a chieftain of the Peoples Democratic Party, PDP, Chief Bode George for attacking him over his comment on the forthcoming Edo election.

Fayose had said the PDP’s governorship candidate in Edo, Governor Godwin Obaseki would lose in the September 19 poll.

Appearing on Plustv Africa, Fayose was quoted as saying that despite being a member of the PDP, it would be difficult for him to support Obaseki’s re-election bid.

George had wondered why a committed member of a political party could make such comment when he had immensely benefited from same party.

“I am countering such remarks by telling the people of Edo State that we, members of the PDP, in the South-West are in support of Obaseki.

“We pray for him and we will work and support for him to win the election,” George said.

But Fayose said on his twitter handle that he just read the response of Chief Bode George to his understanding of what he said concerning the Edo State election.

“Even though I won’t like to dignify him with a response, it is important that I set the records straight because it appears that he may have deliberately read different meanings to what Political gains he wants to make out of it and I careless.

“My position is that, for obvious reasons, I am not a fan of both Gov Obaseki and Oshiomhole. That notwithstanding, I believe that Obaseki will win, but he should honour his agreement with the PDP by not returning to APC after assuming office for the second term for flimsy excuses,” he said.

According to him, ‘It is equally important for Chief Bode George to know that I am not the mouthpiece of South West PDP. I speak for myself and I take responsibility for whatever I say.

“Above all, we still remember his negative statement concerning PDP on Ekiti, Osun and Rivers States elections. We still have the audio and it is a reference point that we will never forget. Pa Bode George should take a rest now.”