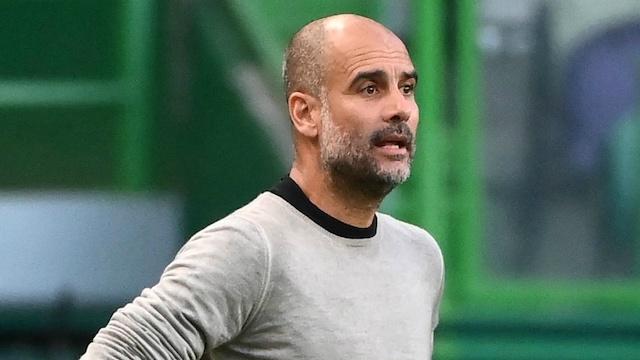 Manchester City manager Pep Guardiola on Saturday said his side lost 3-1 to Olympique Lyonnais to exit the UEFA Champions League because they lacked the perfection needed in Europe’s top competition.

Manchester City fell behind to Maxwel Cornet’s strike in a sloppy first half of the quarter-final match.

They then looked like their usual selves after the break and levelled through Kevin de Bruyne.

However, they were downed by two strikes from Moussa Dembele, sandwiched between an unbelievable open-goal miss from Raheem Sterling.

“It is what it is and hopefully one day we’ll bridge this gap,” Guardiola said after a fourth successive failure in the UEFA Champions League with Manchester City.

“We struggled in the first 25 minutes, but in the second half we felt free. We were there and I had the feeling we were better than them. But you have to be perfect in this competition and we were not.”

Guardiola did not complain about Lyon’s second goal, which survived a VAR review after a potential foul by Dembele on Manchester City defender Aymeric Laporte.

“I don’t know, I don’t want to talk about those circumstances because sometimes it seems like I’m complaining or looking for excuses.

“We are out, I had the feeling we were incredible already, but we made mistakes in the boxes in the key moments.”

Guardiola also rued Sterling’s astonishing miss which would have made it 2-2 and they were promptly punished by Dembele’s second goal which was the killer blow.

“We created more chances, had more shots, we did everything, but unfortunately we are out again.”

Guardiola also rued his tactical formation, which he explained was done to try to cover his side’s weaknesses.

He opted to line up with an unfamiliar three-man defence with wing-backs, while Phil Foden and Bernardo Silva were unused substitutes despite the need for goals.

When asked about his line-up by BT Sport, Guardiola said: “No, what we have done is try to cover our weak points in comparing with the strong points, like they make incredible [moves] in the channels with the two-v-two.

“[After the] first 15-20 minutes of the first half, it was magnificent, we unblocked our respect a little bit, or we struggled to find our spaces to attack and in the same shape we played well in the final 10-15 minutes.

“We created chances, scored a magnificent goal, but unfortunately missed another one.”

The match was defined by a scarcely believable period in which Sterling blazed over the crossbar with the goal wide open before Dembele pounced on a poor parry from Ederson at the other end to make it 3-1 and all but end City’s hopes.

Guardiola accepted that to progress in the Champions League such errors cannot occur.