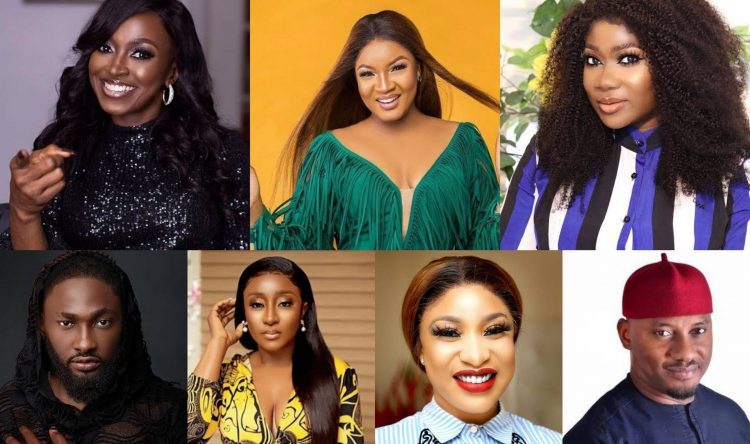 Ace actress and Nollywood sweetheart, Genevieve Nnaji tops the list over two million followers on the social media app, Twitter. The 41-year-old won the Africa Movie Academy Award for Best Actress in a Leading Role in 2005, making her the first actor to win the award. She has a beautiful daughter.

Omotola who possesses an ageless beauty comes second on the list with over one million followers on Twitter. She recently disclosed that she contracted the novel coronavirus and is receiving treatment.

Third on the list is the newly appointed Director, Social & Empowerment of Committee of Youth on Mobilization and Sensitization (CYMS), Tonto Dikeh. With over one million followers on Twitter, Tonto is one of the most sought after Nollywood actresses.

Yoruba actress Funke aka Jenifa who joined Twitter in December 2010, has amassed over one million followers. The 42-year-old mother of twin boys is married to JJC Skillz. She shot into limelight after starring in the sitcom ”I Need to Know” from 1998 to 2002.

Fourth on our compiled list is the soft-spoken Rita Dominic, the elegant 45-year-old who hails from Mbaise, Imo state. On her verified Twitter page, Rita has accrued 1.1 million followers.

Ageless Nollywood actress Kate Henshaw comes sixth on the list with more than seven hundred thousand followers on Twitter. The 49-year-old actress is a fitness enthusiast and makes sure to look elegant for her fans.

Vibrant actress Mercy Johnson-Okojie who hails from Kogi state comes seventh on the list with over five hundred thousand followers. Mercy is popular for her roles in traditional Igbo home videos. She is married with four children.

Yul, son of popular ”proverbs” orator, Pete Edochie has almost five hundred thousand followers. He has 493.2k on Twitter. The 38-year-old Nollywood actor once disclosed that he was named after popular Russian actor Yul Brynner.

Nollywood dark-skinned beauty Ini Edo comes in ninth with 485.4k followers. In 2014, she was appointed as a United Nations Habitat Youth Envoy by the United Nations.

The second male on the list is Uti Nwachukwu with more than four hundred thousand followers on Twitter. The 38-year-old shot into limelight after he won Big Brother Africa season 5. Uti began his acting career in 2011 and has so far featured in several movies.