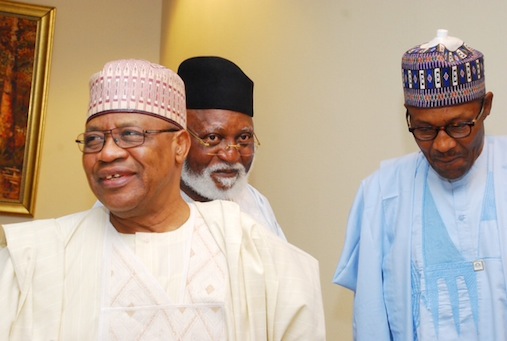 Ibrahim Babangida and Buhar with Abdulsalami, a grudging birthday message?

He ruled Nigeria between 1985 and 1993 and went down in history to have annulled the freest election ever conducted in Nigeria.

He also introduced an economic Structural Adjustment Programme, that led to the massive devaluation of Nigeria’s currency.

On the bright side, his administration opened the economic space for private entrepreneurship. Banking and the broadcast industry became open to many young Nigerians.

His administration also built the Third Mainland Bridge in Lagos and sped the movement to the Federal capital, Abuja in 1991.

In a statement signed by Femi Adesina, special adviser on media, Buhari joined Babangida’s family, friends and associates to celebrate the military president.

“As the former military leader turns a new age, the President believes his services to the country will always be remembered”, Adesina said..