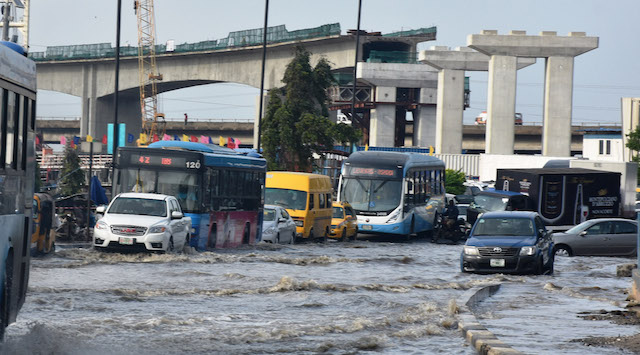 Lagos State Government over the weekend alerted residents that the state will experience heavier rainfalls from the end of this month, saying it is intensifying measures to minimise the effects.

Commissioner for the Environment and Water Resources, Tunji Bello, in a statement said work is ongoing on more than 200 secondary channels with over 80 percent in various stages of completion just as 46 primary Channels are presently receiving various forms of attention.

“This is in addition to the gigantic efforts of our Emergency Flood Abatement Gangs (EFAG) that are being deployed round the state to undertake quick fix to free manholes or clogged up drains manually” he said.

He stated that one of the new measures put in place to combat flash flooding is the provision of pumping stations with a pilot one being planned for Ilubirin in Lagos Island.

He explained that the pumping stations would ensure quick pumping out of water from flooded neighbourhoods and reduce risk of loss of lives and damages to properties.

Bello said major flood-prone areas in the State that are natural buffers to the lagoon like Isheri and its environs, Owode, Agboyi –Ketu would also benefit.

In his words: “For a coastal city like Lagos, once it rains consistently for a minimum of 8 hours, we are bound to have flash flood caused by increasing inability of effective discharge into the lagoon which is brought about by a rise of the ocean level.

“This will automatically lock up all our drainages and until the water level goes down, the drainages would be unable to discharge”.

“This is the new wave in most coastal cities around the world, including those who have adopted the best of technological advancements to curtail flooding”

Relying on data from the Nigerian Hydrological Services, Bello said the months of July, August, September and October also known as JASO months signify heavy rainfall, flooding and flood disasters in most parts of the country.

Bello said the management of the Ogun Osun River Basin Authority has also commenced staggered release of water from the Oyan Dam, with 8 to 10 million cubic meters being released in August, which will increase to 18 million in September and 23 million cubic meters in October which is the peak.

He appealed to residents of low lying areas that are contiguous to the Ogun River to be alert to the possibility of leaving their homes being flooded as water is released from the dam.

He urged residents to adopt an attitudinal change of not dumping refuse in drainage channels and erecting structures on drainage alignments, vowing to prosecute offenders.

The Special Adviser to the Governor on Drainage and Water Resources, Engr. Joe Igbokwe, maintained that the effort to contain flood was the responsibility of everyone and not left to government alone.

He enjoined Lagosians to collaborate with the Government by cleaning the drainages in their frontages and desisting from Indiscriminate dumping of refuse in unauthorized places.

According to him, “I would like to appeal to Lagosians to always play their part in cleaning of the environment. This must be a collective effort, so residents should ensure they take responsibility of what is going on around them.”

He sounded a note of warning to those engaging in these unwholesome acts to desist, saying that the Ministry had empowered its environmental enforcement agents to arrest and prosecute sanitation offenders in the state.

He, thereafter, enjoined residents to report all cases of drainage blockages, dumping of waste into canals and other unauthorized places to the appropriate authority saying that by so doing you are complimenting the State Government efforts.