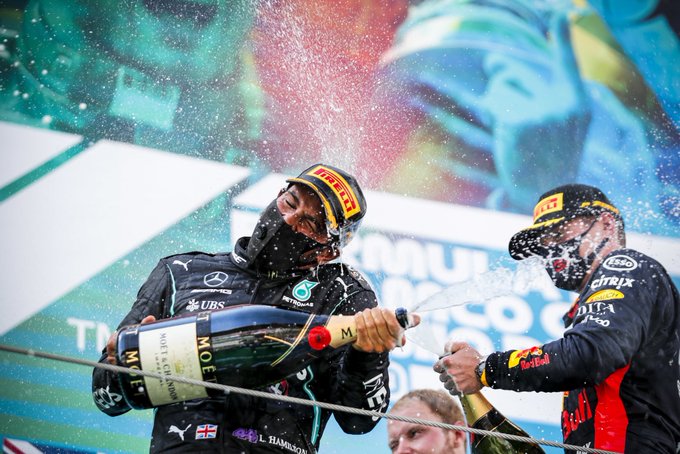 Formula One world champion Lewis Hamilton won in Spanish Grand Prix for the fourth year in a row on Sunday to celebrate a record 156th podium finish and stretch his already commanding lead to 37 points.

The victory from pole position on a sweltering afternoon at Barcelona’s Circuit de Catalunya, in a race without spectators due to the pandemic, was the 88th of the Mercedes driver’s career, and one of the more straightforward.

The six-times champion lapped all but the top three in a race that offered few thrills other than for fans of tyre management.

“I was in a different zone — I didn’t even realise it was the last lap,” said Hamilton, who described the race as one of his best in terms of how he drove.

“I was just in a daze out there…I was ready to keep going,” he added, speaking of how he felt completely at one with the car.

Hamilton is now just three wins short of Ferrari great Michael Schumacher’s unmatched 91, and the podium ended another of the German’s records that he had shared with the Briton since last Sunday at Silverstone.

Red Bull’s Max Verstappen, Hamilton’s closest challenger after six races and winner a week ago of the 70th Anniversary Grand Prix, finished runner-up but a massive 24.177 seconds behind.

Valtteri Bottas was third for Mercedes, having taken the fastest lap after a late stop for fresh tyres, in another big setback for the Finn.

Verstappen has now beaten Bottas in the last four races and been second to Hamilton in three of them. Hamilton has 132 points to Verstappen’s 95, with Bottas falling further behind on 89.

“The weakness for Valtteri today was the start. He caught up to Max but he couldn’t overtake as the soft tyres didn’t work as expected,” commented Mercedes team boss Toto Wolff.

Verstappen had lined up third on the grid but grabbed second at the start as Bottas was squeezed on both sides and dropped to fourth, taking back third place four laps later.

Canadian Lance Stroll took fourth place for Racing Point with Mexican team mate Sergio Perez ahead of him at the finish, on a one-stop strategy, but with a five-second penalty for ignoring blue warning flags.

Stroll had seized third at the start with an impressive surge past his team mate, who was returning from two weeks in quarantine after testing positive for COVID-19.

“I saw a gap on the inside went for it, and it really set me up,” said the Canadian, whose team were again protested by Renault afterwards as at the previous four races. Stewards applied a reprimand, as before.

Racing Point have already been docked 15 points and fined 400,000 euros for a breach of the sporting regulations with a car that is a close copy of last year’s Mercedes but Renault are appealing for a heavier punishment.