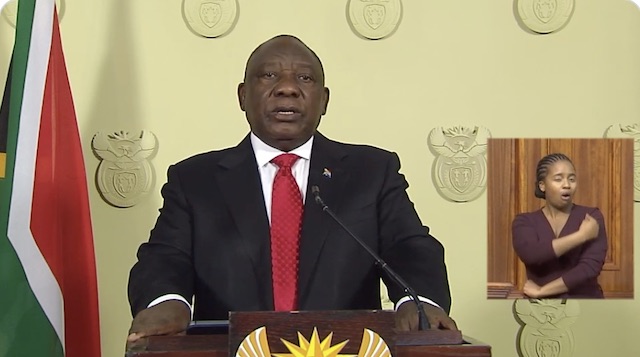 South African President Cyril Ramaphosa on Saturday announced that stringent Covid-19 regulations would be eased on Sunday as the country’s infection rate falls.

The government will remove “nearly all” restrictions on economic activity as of Aug. 17, lift restrictions on inter-provincial travel and the current ban on alcohol and tobacco sales, Ramaphosa said in a televised address to the nation on Saturday evening.

The president also said restrictions on family and social visits will be removed, but South Africans will stay obligated to wear a face mask in public, and no more than 50 people may gather.

“A national “state of disaster,” implemented five months ago, will however be extended by one month, until Sept. 15.

“South Africa has confirmed 583,653 cases and remains by far the worst affected country on the continent, the president said.

“But the number of active cases was falling every day, and the recovery rate is currently at 80 per cent,” Ramaphosa said.

(Watch Ramaphosa’s speech: https://twitter.com/CyrilRamaphosa/status/1294695352235261952?s=20
The restrictions have had a devastating effect on the country’s economy, with millions struggling to survive, and poverty and food insecurity worsening dramatically in just a few weeks.

Even before the pandemic, Africa’s second-largest economy was in a difficult situation.

With high unemployment and brutal social inequality, the country has struggled for years with structural economic problems and an unreliable electricity supply.