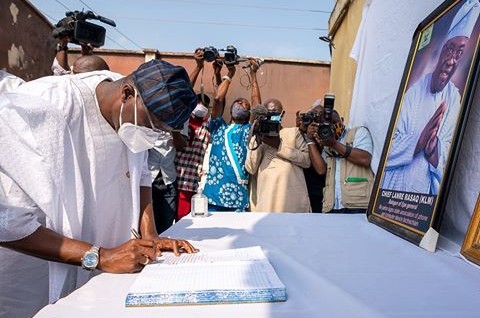 Lagos State Governor Babajide Sanwo-Olu and his deputy Obafemi Hamzat on Sunday paid a condolence visit to the family of the late All Progressives Congress’ chieftain Lanre Razak in Epe.

They were accompanied by several personal aides.

The team was received by the late politician’s son Bayo Razak, League of Imams in Epe, Commissioner 1 of Civil Service Commission Tunde Seriki, and other political leaders in Epe.

Mr Hamzat, who spoke on behalf of the governor, sympathised with the bereaved family and prayed for God’s mercy upon the dead and the family that he left behind.

The deputy governor enjoined all members of the League of Imams and those present to also pray for the deceased, Epe division and Lagos at large.

The son of the deceased expressed appreciation for the condolence visit by the governor and his team.

He urged other political leaders to imbibe the virtues of love and charity which he said his late father exhibited while alive.

He described his father as a cheerful giver and a lover of all.

“We will not allow the sweat of our father to go in vain. We the children will ensure that we uphold the integrity and his passion for humanity and community growth.

“We miss him so much, and he will forever be remembered,” he said.

Earlier, Dr Morufdeen Shittu prayed for Sanwo-Olu, his deputy, other officials and Epe Division, Lagos State and Nigeria at large.

Razak, a grassroots politician, businessman, and the Balogun of Epe, died after a brief illness on Saturday at Reddington Hospital, Lagos, at the age of 74.