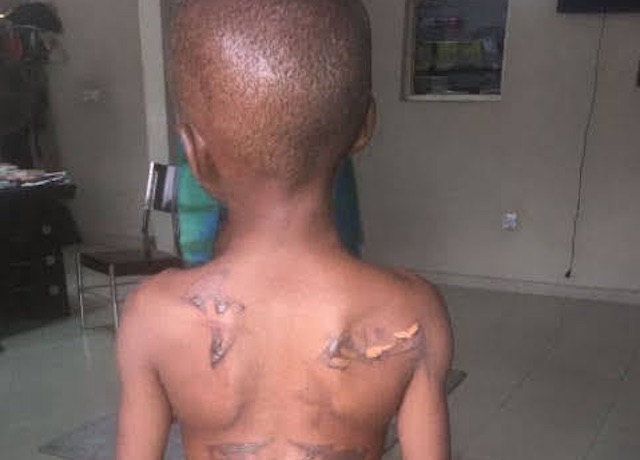 A starving eight-year-old Nigerian boy has been rescued from his aunt following serial torture, after he ate groundnuts worth N50, about $0.10 cent, without authorisation.

The unidentified lady got so annoyed that she decided to scar the child’s body with a hot iron, leaving life-long scars.

The incident happened at Anantigha, Calabar South, on Sunday August 16, after the woman, who serves as guardian to the boy and his two siblings returned from Sunday service, only to discover that the groundnut she left at home was gone.

She reportedly confronted the boy about the missing groundnut.

When the boy confirmed he ate it, she then plugged an electric iron and used it to burn the boy’s back . She also denied him food for the day.

The human rights group who rescued the boy, said it also found older scars on the boy’s body and fingers, a sign that his aunty has been abusing him for a very long time.

The boy and his other siblings have been living with the ‘cruel’ aunt for about three years.

GPI said the lady had been assaulting her nephew with hot iron, burning stove and other hot objects.

“From what the boy has told us, which is also very visible, he has been tortured and traumatised, and the boy is in serious pains. From here we are taking him to a medical facility where he can get adequate care,” Ibor said.

“We have written to the Police and the State Ministry of Humanities and Social Welfare to enable us take good care of him in our own shelter home, because we cannot allow the child to go back to the aunt again”.

Ibor did not state whether the woman has been arrested.